Recently I had to take a couple of long trips on airplanes. And supposedly Amazon Kindle is just perfect for such occasions. I stuffed mine with tons of books and even more samples so that I could browse though them on the first leg of my trip and then buy the books that I’ve liked while I waited for a connection flight. WhisperNet rocks!

However this wasn’t meant to be. As the airplane started to gain altitude and I paged though “The Waste Lands [The Dark Tower III]” I noticed that some lines didn’t update as I turned the pages. At first I thought that it was some weird software glitch and rebooted my K2. However the stubborn lines persisted. As I kept paging though the book more and more lines got stuck. Until soon enough it wasn’t possible to read anymore and my Kindle 2 looked like this: 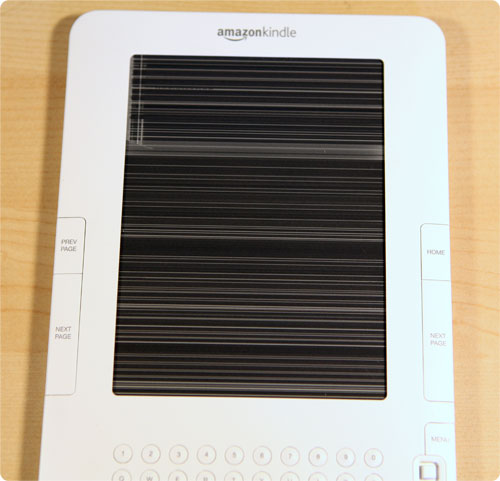 My speculation is that eInk display has a lot of wires connected to it from the “motherboard”. It’s usually done by gluing a sticky plastic band with metallic wires on it to the display that has metallic contacts. Most likely during the production of my particular unit an air bubble was caught under the plastic band. However it wasn’t big enough to cause trouble during quality assurance. However when airplane gained altitude and cabin air pressure dropped a bit, the bubble expanded and gradually ripping more and more of  the contacts apart. Oh, well. No big loss because I ended up having a very interesting chat with a guy in the next seat. As I arrived I had several hours until my next flight so I phoned Amazon support and let them know what had happened. I initiated an RMA so that at least there would be a working Kindle 2 waiting for me at home when I arrived.Once again: Kindle warranty rocks!

What really struck me as odd is that Amazon confirmed my suspicion that the only way you can buy Kindle is from Amazon.com website. I realize that Amazon is an online business but wouldn’t they make a killing in sales if they had kiosks selling Kindles in the airports? Imagine an automated kiosk that allows you to get a Kindle device just by swiping a credit card and create an Amazon.com account in case you don’t have one yet. And then you can immediately start buying your reads right from the device. What also struck me as odd is that there were Sony eBook readers readily available for sale in several airport stores. I guess that they may be useful if you have a notebook computer with WiFi ready to fill it with books. I didn’t though so they were as useful to me as my bricked K2…

Oh, and BTW – no problems with TSA whatsoever.

28 thoughts on “Airplane Bricked My Kindle 2”