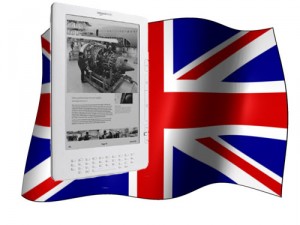 Amazon will soon have a UK launch date finalized for the Kindle, according to British mobile phone trade publication, Mobile Today.  Although its not currently clear when this date will be, the launch should occur in time for the holiday season.

Of course, just because Kindle has been slow to leave the US doesn’t mean that Amazon’s competitors haven’t already cracked the European market.  Part of Amazon’s strategy will now have to be winning away users who already have experience with other eReaders.

What may be the Kindle’s largest selling point is also the reason for the delay: Whispernet.  The reason Kindle isn’t yet sold in the UK is because problems arose in finding a wireless carrier (Orange and Vodafone, 2 major cellular companies in Great Britain,  are working on their own wireless-enabled eReaders with Vodaphone planning to release as soon as this fall).  Qualcomm has taken over negotiations for Amazon, and has apparently found a solution to the wireless problem.

One question on my mind is how the UK Kindle’s will work in the US and vice versa.  Most likely it will not be possible to use wireless connectivity outside your own country. In order to make this a reality Amazon will need ot install universal wireless chipset that would support both CDMA (Sprint) and GSM (european operators). This will incurr extra cost while not making a great difference for 99% of the users. I may be wrong though. We’ll see…