Today Amazon offers I’ll Never Get Out of This World Alive by Steve Earle and The Amulet of Samarkand by Jonathan Stroud just for $1.99 each

Short book description of I’ll Never Get Out of This World Alive:

In 1963, ten years after Hank’s death, Doc himself is wracked by addiction. Having lost his license to practice medicine, his morphine habit isn’t as easy to support as it used to be. So he lives in a rented room in the red-light district on the south side of San Antonio, performing abortions and patching up the odd knife or gunshot wound. But when Graciela, a young Mexican immigrant, appears in the neighborhood in search of Doc’s services, miraculous things begin to happen. Graciela sustains a wound on her wrist that never heals, yet she heals others with the touch of her hand. Everyone she meets is transformed for the better, except, maybe, for Hank’s angry ghost—who isn’t at all pleased to see Doc doing well.

A brilliant excavation of an obscure piece of music history, Steve Earle’s I’ll Never Get Out of This World Alive is also a marvelous novel in its own right, a ballad of regret and redemption, and of the ways in which we remake ourselves and our world through the smallest of miracles.

Steve Earle is a singer-songwriter, actor, activist, and the author of the story collection Doghouse Roses. He has released more than a dozen critically acclaimed albums, including such Grammy winners as The Revolution Starts Now, Washington Square Serenade, and Townes. He has appeared on film and television, with roles in The Wire and Treme.

Here is the short description of The Amulet of Samarkand (Bartimaeus Volume 1) (Bartimaeus Trilogy):

Nathaniel is a magician’s apprentice, taking his first lessons in the arts of magic. But when a devious hot-shot wizard named Simon Lovelace ruthlessly humiliates Nathaniel in front of his elders, Nathaniel decides to kick up his education a few notches and show Lovelace who’s boss. With revenge on his mind, he summons the powerful djinni, Bartimaeus. But summoning Bartimaeus and controlling him are two different things entirely, and when Nathaniel sends the djinni out to steal Lovelace’s greatest treasure, the Amulet of Samarkand, he finds himself caught up in a whirlwind of magical espionage, murder, and rebellion.

Some words about the Aouthor

Jonathan Stroud is a former publishing executive who has published several children’s books in England. He lives in London. 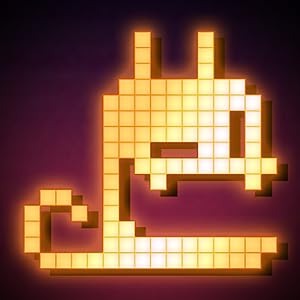 Pix’N Love Rush is a game which Amazon have made free today only.

Take command of Pixel the cat and complete the different levels as quickly as possible, collecting as many bonuses as you can along the way! Your heartbeat cannot resist the Rush! All you love about classic Jump & Run games condensed into 5 minute sessions, or in infinite play mode, for those who have nerves of steel and incredible reflexes!