Winning a stubborn lady turns into the battle of his life for a powerful knight. Lady Sofia Howard has sworn never to marry, after her young heart was broken by an arrogant young squire. She’s spurned every suitor to the dismay of her guardian, King Edward I, who finds that even increasing her dower prize will not lure men to offer for the defiant but lonely Sofia. So the king takes matters into his own hands and betroths Sofia to Sir Tobin de Clare, the man who once broke her heart. Passion explodes and Sofia’s tattered pride demands that Sir Tobin surrender his heart. A battle of wills that ensues that makes war seem tame, when nothing will stop this ruthless warrior from winning his lady. In a classic Barnett battle of will and wit, a knight and his lady find that love at first sight is dangerous at best and never, ever easy. Wicked has all the pageantry of Medieval England, liberally laced with poignancy and humor.

Since her first book, Jill Barnett has been acclaimed as a fresh and witty voice in romantic fiction. Set apart by her unique humor and whimsical view of the world, she creates delightfully original novels with characters who, according to Romantic Times, “seem so real they are like close friends. Pure magic!”

She is the recipient of a National Waldenbooks Award and a four-time RITA and Golden Choice finalist. Her work has been critically acclaimed as some of the very best by the Detroit Free Press, The Dallas Morning News, and Publishers Weekly.

Heat is a second book in today’s daily deals and costs $2.99. It was written by Mike Lupica.

Michael Arroyo has a pitching arm that throws serious heat. But his firepower is nothing compared to the heat Michael faces in his day-to-day life. Newly orphaned after his father led the family’s escape from Cuba, Michael’s only family is his seventeen-yearold brother Carlos. If Social Services hears of their situation, they will be separated in the foster-care system—or worse, sent back to Cuba. Together, the boys carry on alone, dodging bills and anyone who asks too many questions. But then someone wonders how a twelve-year-old boy could possibly throw with as much power as Michael Arroyo throws. With no way to prove his age, no birth certificate, and no parent to fight for his cause, Michael’s secret world is blown wide open, and he discovers that family can come from the most unexpected sources.

Mike Lupica is the author of many novels for sports fans, most notably the #1 bestselling Travel Team, his first novel for young readers. His columns for New York’s DailyNews are syndicated nationally, and he is a regular on ESPN’s The Sports Reporters. Mr. Lupica lives in Connecticut with his wife and their four children.

Pick a Piggy is a game for your Kindle Fire. It is free today only. 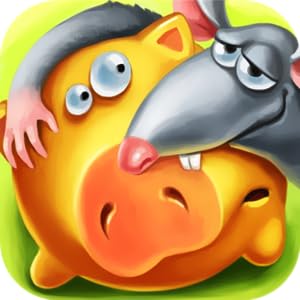 Pong, a little toy piggy, dreams of getting out of the dusty basement to see the world. Help her climb through the maze-like house in this physics-based puzzle game. Catapult your bouncing piggy through the puzzle in more than 100 challenging levels to porky freedom.

Carefully use your finger to bounce and launch Pong through the levels. Use strategy and anticipate the physics with care. A bad bounce could mean trouble for Pong.

Along the way, help Pong collect stars and solve the engaging logic puzzles. But bacon-based brainteasers aren’t your only problem. There are some pretty dangerous obstacles during your journey to freedom. Avoid spider webs, trap doors, buttons, levers, springs, cushions, rats, chemical spills, and electric shocks by ricocheting Pong off the walls, floors, and ceilings.

Go Where No Toy Pig Has Gone Before

Pick a Piggy offers a wealth of touchscreen-controlled entertainment on your Android device with quirky animations and lovable characters. Pick a Piggy is a premium pork-propelled puzzle game requiring both strategy and skill in equal measure.