From the voyages and raids of the Viking tribes in the 10th century to the healing sought by Vietnam War soldiers decades after the conflict, today’s deal presents a collection of stories about war and its aftermath. Today’s thought-provoking books are from $1.99 each (up to 89% off). Here is the list of these books:

1. Lost in Shangri-La: A True Story of Survival, Adventure, and the Most Incredible Rescue Mission of World War II (P.S.) by Mitchell Zuckoff

2. The Only Thing Worth Dying For (P.S.) by Eric Blehm

4. We Are Soldiers Still by Harold G. Moore and Joseph L. Galloway

Some superheroes wear rocket-propelled boots, drive super-powered cars, and have X-ray vision. But other superheroes wear army boots, drive tanks, and go away for long trips to make the world a safer place. It’s a tough job, but that’s what superheroes have to do. With Melinda Hardin’s simple text and with Bryan Langdo’s endearing watercolor-and-pencil illustrations, Hero Dad makes a difficult and tender subject more accessible to children with parents serving far from home.

Some words about the Auhtors

Author Melinda Hardin lives in Clinton, Massachusetts. She received a degree in secondary education from Western Michigan University. She has traveled extensively and enjoys time with her family.  Hero Dad is her first book and is about being the child of a military father, from the child’s point of view.

Illustrator Bryan Langdo lives in New Jersey. He has illustrated nearly thirty books for children, and wrote two of them. 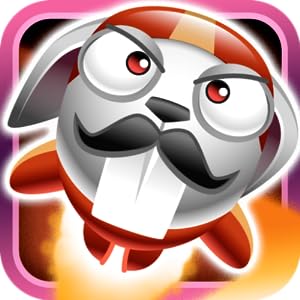 Stunt Bunnies Circus is a free application for your Kindle Fire for today only.

The Stunt Bunnies Circus is in town and Jet Bunny needs your help! Wow the crowd and pluck the tumbling circus rabbits from certain death.

Ringmaster Claude Reynard, like all sly foxes, cares little for the safety of the cute Stunt Bunnies troupe. With each show he introduces more fiendish death defining acts for them to perform. Fail in your task and they’ll be cooked with the carrots.

Stunt Bunnies: Circus is the first in a series of cute, pick up and play action-packed games featuring cute Bunnies hell-bent on self-destruction whatever the setting.