If you like to read detective books about FBI and so on this book is for you: Dangerous Games by Michael Prescott just for $0.99

Maverick FBI special agent Tess McCallum (nicknamed “Super Fed” by an adoring media) (the central investigator in previous novel, Next Victim) is back and she’s got a new partner, one she doesn’t want and doesn’t trust. She’s chasing a vicious kidnapper known as the “Rain Man,” who leaves his victims chained up in vast storm drain system underneath Los Angeles and doomed to drown unless their ransom is paid on time, and only by the City of Los Angeles, to his off-shore bank account.

A freelance security agent named Abby Sinclair, who specializes in putting stalkers behind bars, often by extra-legal means, has already had her hooks in the case for a while and is working for a woman who may have been targeted—and who doesn’t trust the authorities to protect her.

Since a rain storm has already started, the time limit on saving a woman’s life is very short—and there are already two dead victims to demonstrate the high cost of making mistakes or even just being too slow to act. Only by, very reluctantly, working together can the two investigators piece together the clues to help them figure out who (and maybe even how many people) the killer really is. Nail-biting suspense, unexpected story twists, surprise piled upon surprise all work together to deliver an irresistible read and an incredible page-turner of a story. 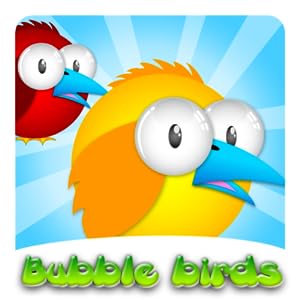 Also you can download and spend time playing with Bubble Birds (ads free) on your Kindle Fire absolutely free.

If you enjoy match-three bubble bursting games, you’ll love Bubble Birds. This challenging game is perfect for kids to kill time while in the car or in the waiting room.

Waves of birds are gliding down toward the ground, and it’s your job to ensure they don’t hit the bottom. Fire off a bird with your slingshot to match it with at least two other birds of the same color.

If you match up at least three birds of a feather, those birds will burst in a cloud of feathers and disappear. Plan out your shots carefully – you can see which colored bird is coming up next.

Bubble Birds features fun and colorful backgrounds, such as a jungle, the Artic, a beach, and three more scenes. Slingshot your way through 136 levels and two game modes. Compete with players around the world on a global leaderboard.