The Kindle eReader has long come with unrestricted 3G access on its more expensive models.  This has been such an expected option that when Amazon stopped offering the feature on the newer Kindle 4 and Kindle Touch models it shocked many of us.  Fortunately, for those who are still interested in the service, there is always still the Kindle Keyboard 3G.  While they aren’t really being pushed as a current product any longer, Amazon still seems to have plenty of the older model with its unrestricted access available on their site.

The biggest problems with taking advantage of this feature for anything besides simply purchasing from Amazon have been tied to the shortcomings of the eReader itself.  The Kindle Keyboard’s 5-Way directional controller is nice enough, but can be incredibly tedious to use.  The web browser is extremely basic at best, and will almost certainly enough fail to load important pages or crash completely from time to time under regular use.  Still, it is a free lifetime 3G connection that accomplishes the goal of keeping you connected to the Kindle Store no matter where you happen to be.  It is hard to complain about that.

What was once just a convenience for people willing to spend some extra money on their initial Kindle purchase might now be a valid thing to keep around for emergencies, however.  You see, somebody has finally worked out a way to make this free 3G coverage available to more generally useful devices via a tethering hack.  While I won’t go into the details here (this is absolutely warranty-voiding and quite possibly illegal enough for action is abused), hacker Andrew D’Angelo has posted the complete method on his easily searchable personal web site.  Using this method, you can now get your PC or laptop onto the internet via the Kindle Keyboard’s cellular connection.

I say that this is an emergency tool specifically because every bit of data sent through this connection runs through Amazon’s proxy servers.  You are tagged with a unique ID number that can easily trace unusual activity back to your personal account.  Since this is, as mentioned above, rather blatantly in violation of the Terms & Conditions for Kindle 3G use, chances are good that both the connection and the associated account will be shut down before too long at the very least.

This could be great to have around for those situations where a storm takes out the local communications, and I can think of some flooding a while back that I would have loved to have it available for, but it is not a tool for daily use.  Still, it might be worth considering the 3G option on any new Kindle purchase now even if you have no interest in it as an aid to your eReader experience.  $40 added to the purchase price for a cell connection with no monthly fee running through a device that only runs out of batteries once every month or two is great by itself, but being able to use that connection so fully when you really need to have that available is invaluable.

The Kindle Touch may not be running Android like its tablet counterpart, but it also doesn’t run the operating system found in previous models of the Kindle eReader line.  The focus is now on HTML5 and Javascript interfaces rather than the previous Java implementations.  This means that pretty much none of the old hacks and mods that have been released for the Kindle line will be of any use to customers this time.  Of course that was bound to be addressed fairly quickly.

Yifan Lu, a freelance developer, has found an exploit in the way the Kindle Touch handles MP3s which will allow people to easily jailbreak their new eReader.  Along with that discovery, he revealed that the majority of the device’s interface is simply HTML pages in disguise.  This alone means that coming up with interesting mods will be significantly easier than was previously the case, unless I miss my guess.  It implies a greater degree of system control through Javascript than is normally possible.  For now there isn’t much for an end-user to work with, but there is every reason to believe that you will find modules for adding EPUB support and any number of other fun extra functions in the months to come.

In order to attempt this Jailbreak (Which neither I nor this site recommend or take any responsibility for as it voids the warranty and may render your Kindle unusable if something goes wrong), head to this site and follow the instructions included in the Zip Archive’s README file.  This involves nothing more than connecting your Kindle to a computer, copying a .mp3 file to your music folder, disconnecting from the computer, and running the music player.  A button pops up labeled “Press to Jailbreak!” and you’re done.

My trial of this process went smoothly and did pretty much nothing.  It is definitely anything but an urgent need or an inherently beneficial act for most people.  All you are doing is enabling root access to your device, which means that among other things installing third party software will be possible. Chances are good that even with this it will not be possible to open up general 3G internet access, use of neglected hardware like the internal mic, or removal of advertising, but other than that there shouldn’t be many limits.

If you are interested in the potential that the process opens up, I would recommend both acquiring your Kindle Touch in the near future and making sure not to allow any software updates on the device until it is certain that the changes will be kept around.  While Amazon has been incredibly open in their lack of interest in securing the Kindle Fire in any significant way, they have a history of being somewhat more closed with their eReaders.  Not the least important reason for this is the heavy investment the company has made in their proprietary format, the evasion of which would likely be the first thing that customers use their new found freedom to achieve. 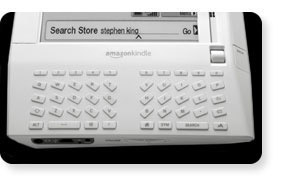 If your one of the many people interested in buying the Kindle, but unfortunately you live outside the US, then until Amazon decides to release Kindle in your local you cant enjoy the benefits of owning a Kindle. Kindle owners here in the US are also interested in knowing whether using their Kindles outside the US is possible. Amazon states in it’s FAQ section that it is working on releasing the Kindle for international markets and asks that international customers to sit tight for the time being.

That’s not good enough for some.

Where there’s a will, there is way. A post by Nerdgirl on her site offers a solution for those unwilling to wait for the official Kindle release in their country. The hack involves tricking Amazon into thinking that your billing address is associated with a US address — apparently Amazon does not verify the address unless you purchase a dead-tree book. This then allows you to associate a Kindle device with your Amazon account, once your Kindle is associated with your account you can use gift certificates to buy e-books. But if your expecting them to be delivered wirelessly then think again, they wont be, you will have to transfer the e-book via USB.

The very fact that someone has discovered this hack proves that people outside the US are itching to get their hands on the Kindle.

You can read the full instructions on Nerdgirls website by following the link below.

There probably wont be a post tomorrow since its new years eve and I will be out having fun! So enjoy these pictures, be safe and have a happy new year! 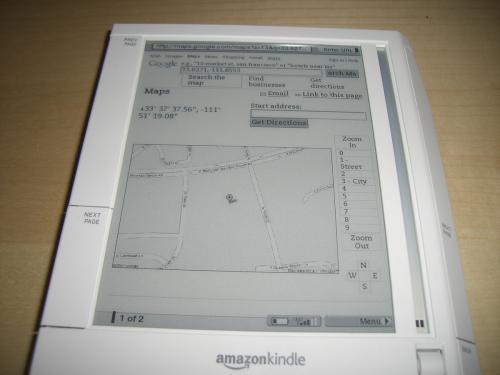 A few days ago we reported that the Kindle had been hacked to allow mobipocket eBooks to run on the device. The guy behind the hack was hacker Igor Skochinsky. It seems Igor has done it again, this time uncovering a handful of exciting hidden features.

The most exiting of which, as you can see from the image above, is a crude GPS system which uses Google’s experimental MyLocation service to pinpoint your approximate location. Google’s MyLocation also allows you to look for local gas stations, hotels and restaurants or whatever else you want to search. Interestingly though some of the commands such as “find nearest gas station,” are built into the Kindle, which suggests at one time this the feature was planned for release, but for whatever reason was scrapped. My feeling is that it was probably the extra bandwidth costs that made them scrap this feature since Amazon is paying Sprint for using the Whispernet service at no cost to Kindle owners.

For those of you who are concerned about your privacy, I dont think Amazon is using this hidden feature to track your location, like I said before, it was probably a planned feature which got scrapped, and somebody probably forgot to remove the code. Rest assured we’ll keep you up to date of any new information that comes out regarding this hidden feature which may effect your privacy.

Other hidden gems include a hidden picture viewer, slideshows, a screenshot utility, a clock, a diagnostic mode, quick-look, the classic Minesweeper game and many more. You can read up on all the new features by clicking the link below. We’ll try to get some snaps of these up on the blog as soon as we get them.

Getting these hidden features requires fiddling with the firmware, so in that sense you need to know what you are doing. If you dont know how to use the modification scripts, you stay well clear as they could damage your Kindle.