For anyone interested in manga, there is a free, open source software available called Mangle.  Manga is a series of Japanese cartoons or comics that cover all genres such as action, comedy, romance, sports, science fiction, fantasy and others.  Manga has become a huge hit in Japan and worldwide.  Usually the comics are printed in black and white, but there are a few color versions floating around.

Mangle was created by Alex Yatskov several years ago for the older generation version of the Kindle.  This software works really well with the Kindle 3.  Click here for downloading instructions, and for images of software demonstrations.

The Kindle 3’s improved screen makes graphics much easier to read.  Graphics have been a common complaint among Kindle users, but that seems to be improving.  You can zoom in or out and rotate the images as desired.  Manga pages in the physical books are small, but there are a lot of them.  More pages take up space, so transferring them to a digital format solves that issue.

The other cool thing about providing manga in a digital format is that it attracts an audience who might not like to read regular books.  Some people just enjoy reading a story through graphics rather than words.  It would be awesome if this option could be provided on all of the Kindle platforms: PC, Mac, Android, iPhone and iPad.  When I think about it though, the black and white aspect of manga might just be a better fit for the Kindle device itself.

There is a good selection of manga available in the Kindle Books section on Amazon.  A lot of them seem to be either in the romance or horror category.   Anyone know of any particularly good novels they would recommend?  I have been introduced to the world of manga, but would like to hear about what great titles are out there to check out.

With Kindle 2 if you wanted to read books that contain non-English characters like Cyrillic, Chinese, Japanese, Hebrew etc you had several options:

With Kindle DX option 1 is ruled out for the time being since Unicode font hack doesn’t install on it. (Update: Unicode Fonts Hack now works on Kindle DX as well). However because Kindle DX supports PDF natively there is another way. PDF supports “font embedding”. This means that fonts that are used in PDF file are stored within the file itself or at least a subset of font that describes all the characters that are actually used. So Kindle can display Russian text in PDF files even though there are no Russian fonts on Kindle DX itself.

Luckily creating PDF files is easy as printing documents. There are dozens of PDF “converters”, “creators” or “writers” out there that all work in a similar way. They are installed as virtual printers that instead of printing documents on paper save them on your PC in PDF format. So any file that can be opened in program that supports printing (and 99% of them do) can be converted to PDF. Learn how to open PDF file.

I tested several such programs and all of them produced files that I could read on my Kindle DX. Visually files produced by all of them were identical and of similar size (on disk). The only difference is how particular program behaves itself on PC. In the end I went with PDFCreator because it’s easy to install and use and doesn’t come with junkware.

There are many more free and paid PDF converters out there. I’ve reviewed just a few free ones. If you think you know of a better one – drop a comment here and I’ll take a look.

You can see a sample (click to zoom) of Russian text that was downloaded from lib.ru, copy-pasted into Microsoft Word, font bolded and converted ot PDF using PDFCreator.

Patches were tested by several volunteers and all results were positive. The patch works and doesn’t cause any problems. You can now read books on your Amazon Kindle 2 in Russian, Chinese, Japanese and probably number of other languages.

Currently I’m releasing hack with two different fonts: Liberation that comes from RedHat Linux and Droid that comes from Google Android project. Both fonts are open-source and they are the best ones I could find that suit the needs of this hack. Finding good fonts was much harder than creating the hack itself.

Instructions and download links can be found here. Please-please-please-please-please do be very-very-very-very-very careful if you decide to experiment with adding your own fonts to the hack. If you find good free or reasonably priced fonts that work – please let me know – I’ll test them and make more versions of the hack available here and give you proper credit. Please spread the word about this hack as it will increase chances of someone finding better fonts that can be used with it.

Here are some screenshots of what Kindle 2 with hacked fonts looks like: 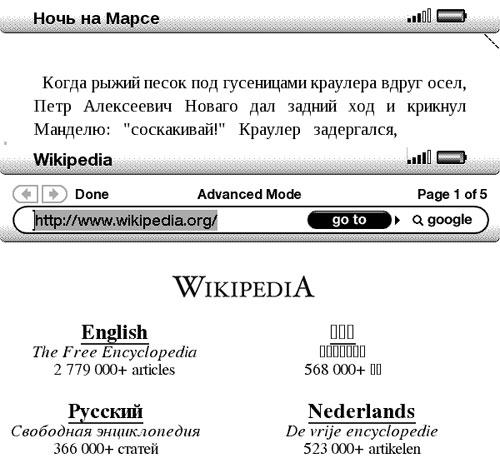 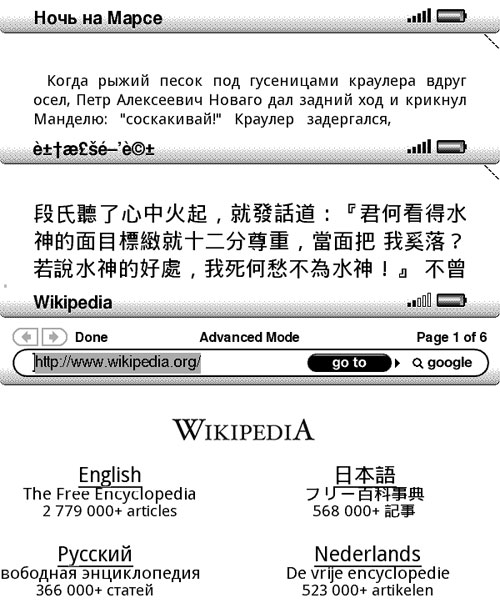 I would like to thank John, Ted and some other folks for helping me test this patch. Another big thank you goes to Igor who created the python script that creates Kindle 2 update packages.

I’ll now shift my attention to figuring out creating custom recovery mode updates. Once this is done – I’ll have much more freedom in messing with fonts and other settings without fear of bricking my Kindle 2.