Ok, lets pick up where we left off: My Kindle DX has just arrived… 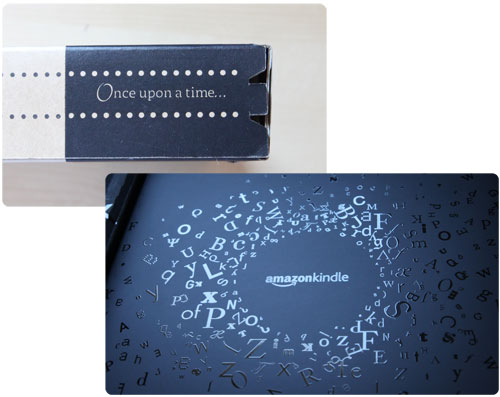 Kindle DX is much larger and slightly heavier than Kindle 2. In fact If you put K2 on top of DX, K2 would be almost the same size as DX’s screen. It’s still comfortable to hold and flip pages, at least for right handed people like me. Of course it works upside down and it’s usable this way but I will pass on making a judgment on how comfortable such setup would be for left-handed people. One thing for sure – alphanumeric keyboard is not usable this way. Landscape mode is comfortable. As Kindle is rotated, 5-way controller is automatically remapped so left remains left and right remains right.

Amazon leather cover now comes with two magnets to keep itself shut. If you are still using floppy disks from the previous millennium you shouldn’t put them next to Kindle DX if you are using the cover. 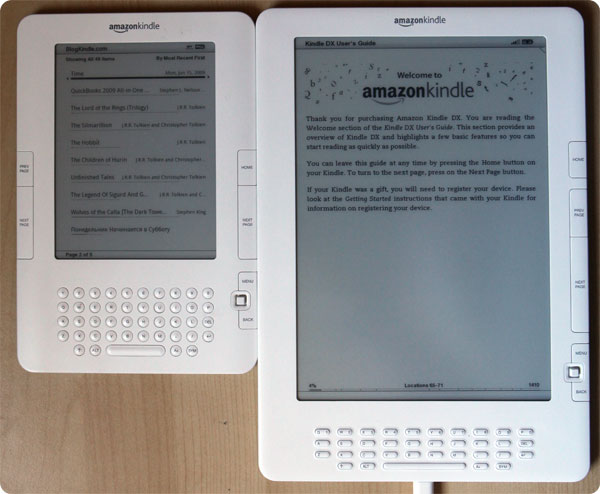 It’s large. That’s for sure. 824×1200 pixels. It seems to update faster than Kindle 2 and whiles seems to be slightly lighter. There’s minimal ghosting sometimes just as on my second K2. The first K2 that was bricked by airplane didn’t have ghosting problem. Screensaver pictures seem to be the same as in K2 but upscaled and they do look gorgeous on the big screen. Fonts seem darker. So looks like Amazon took complaints about low contrast in Kindle 2 seriously and decided to address them. Spatial resolution is slightly lower – 150ppi comared to 167 in Kindle 2.

I’ve downloaded samples of some of the “books that look good on Kindle DX’s large screen“… Really they should be called “books that would have looked great on Kindle DX should have looked great on Kindle DX if images were not downsampled to lower resolution… I’ve checked 3 books and none looked as good as screensaver images. You could clearly see that illustrations in these books are much lower resolution than the screen. Hopefully this will get fixed as some point.

There are 7 font sizes just as in previous models. However the smallest font on Kindle DX seems to correspond to second smallest on K2. I can’t say for sure because I have Droid fonts installed on my K2 so that I can read Cyrillic. When font size dialog is invoked there are 2 additional options there that are specific to DX: “Words Per Line” and “Screen Rotation”. The second one is pretty much self-explanatory: you can explicitly select one of the four rotations or set it auto and let the accelerometer control it. “Words Per Line” really controls left and right margin width. Three available options are: default, fewer and fewest. At the moment I don’t quite understand the use of it. If I would want smaller screen area I’d just use K2. As this option is changed inline pictures as downscaled as well.

Works as advertised – the image rotates as you rotated the device. Refresh time is good. Changing scren orientation is as fast as flipping a page.

Keyboard layout is QWERTY. Numeric row is merged with top letter row. To enter numbers you need to hold the “Alt” button. If you just need to enter one digit, you can press “alt” and digit in sequence (“alt” is “sticky” just likethe “shift” button). On DX buttons stick out more and are harder to press. Overall I found K2 keyboard more comfortable and easy to use than DX. Except “Next page” button being larger on DX, buttons on the right edge of the device are identical. 5-way controller stick is higher on DX.

Kindle DX relies on it’s large screen to display PDF files “as is”, without re-flowing the text (which would be next to impossible with PDF since the format lacks any concept of paragraphs or text continuity).  The only way to zoom that I could find is to switch to landscape mode. It’s not such a big problem because most PDF files that people would want to read are preformatted for either Letter or A4 page size and Kindle DX screen is comparable in size to these formats.

Although there is concept of pages in PDF and you can navigate to any given page, both internal and external links in PDF files are disabled. Structured table of contents that is present in some PDF files is not usable either.

Graphically PDF files look fine and crisp. Rendering time is also good. It usually takes around 5 seconds to open the file initially and after that pagination speed is the same as when reading ebooks.

It’s not possible to download PDF files to your Kindle via WhisperNet. Most likely this is because Amazon pays 12 cents per megabyte to Sprint while keeping Internet connection free for Kindle owners. Given decent support that Kindle DX has for PDF files, abundance of PDF files on the Internet that people would like to download and read and relatively large size of these files it wouldn’t be a good idea for Amazon to enable such downloads.

It so happens that in my past life I spent a lot of time writing software that would process PDF files. Some time later I’ll run a comprehensive test of PDF support in Kindle DX and publish the results here.

Web browsing seems to be that same as on Kindle 2. “Advanced mode” is now called “Desktop mode'”. Basic mode is still much faster and usable than desktop mode. I tried to render BlogKindle.com in desktop mode and DX actually rendered it quite well. The only problem I could see was the lack of PNG transparency support. 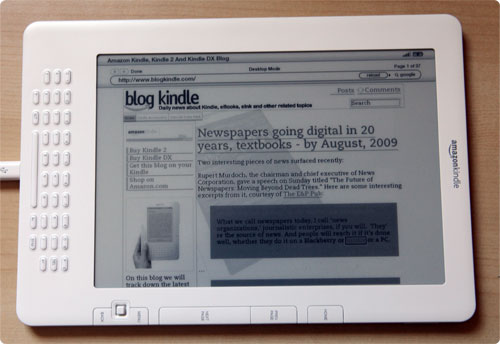 There are seemingly no changes in this feature. Funny thing that I’ve noticed as I experimented with it that female voice seems to have trouble pronouncing word USB. With male voice turned on is sounds much more natural.

Apart from PDF support, changes to font size dialog, picture viewer mentioned above and additional game mentioned below Kindle software remains the same. Kindle DX comes out of the box with firmware version: 2.1 (337560062). Source code for Kindle DX is already published by Amazon and I’ll take a look at it. What seems important is that it has a separate section for Kindle DX sources code. On this basis I would speculate that next version of software for Kindle 2 is going to be 2.0.4, for Kindle DX it’s going to be 2.1.1. These will come from separate branches of code so I wouldn’t hope too much for PDF support being ported to Kindle 2 any time soon.

Unfortunately Kindle DX was unresponsive  to the “old way hacking”. When I created a small “update” using Igor’s tool to dump the system log along with full directory listing to the root of Kindle drive the “Update Your Kindle” menu item remained disabled. Either Amazon has changed the format of the update files or they’ve come up with some way to digitally sign them to prevent hacking. Either way this means no unicode fonts for Kindle DX for the time being :(

I did a quick check on Kindle 2 easter eggs.

Kindle DX is a nice device. Perhaps it’s not as much better as people hoped it would be but Kindle 2 sets the bar quite high. For day-to-day book reading I would still recommend Kindle 2 because of greater portability. If you can’t get by without PDF support and don’t want to use Savory hack (that would add similar or better level support than what’s available in 2.1) – Kindle DX is right for you. Hopefully with time there will be digital media that would take advantage of Kindle DX’s large screen.

I can’t believe that I never did a post about Kindle easter eggs. Here is the most complete one. I’ve checked them all one by one and here are the ones that still work in Kindle 2:

Sadly, all location based Google maps services in the browser seem to be disabled.