Today Amazon offers The Rise and Fall of the Third Reich by William Shirer just for $1.99.

When the Third Reich fell, it fell swiftly. The Nazis had little time to cover up their memos, their letters, or their diaries. William L. Shirer’s definitive book on the Third Reich uses these unique sources. Combined with his personal experience with the Nazis, living through the war as an international correspondent, The Rise and Fall of the Third Reich not only earned Shirer a National Book Award but is recognized as one of the most important and authoritative books about the Third Reich and Nazi Germany ever written. The diaries of propaganda minister Joseph Goebbels as well as evidence and other testimony gained at the Nuremberg Trials could not have found more artful hands.

Shirer gives a clear, detailed and well-documented account of how it was that Adolf Hitler almost succeeded in conquering the world. With millions of copies in print, The Rise and Fall of the Third Reich has become one of the most authoritative books on one of mankind’s darkest hours. Shirer focuses on 1933 to 1945 in clear detail. Here is a worldwide bestseller that also tells the true story of the Holocaust, often in the words of the men who helped plan and conduct it. It is a classic by any measure.

The book has been translated into twelve languages and was adapted as a television miniseries, broadcast by ABC in 1968. This first ever e-book edition is published on the 50th anniversary of this iconic work.

William Shirer was originally a foreign correspondent for the Chicago Tribune and was the first journalist hired by Edward R. Murrow for what would become a team of journalists for CBS radio. Shirer distinguished himself and quickly became known for his broadcasts from Berlin, accounting the rise of the Nazi dictatorship through the first year of World War II. Shirer was the first of “”Edward R. Murrow’s Boys””–broadcast journalists–who provided news coverage during World War II and afterward. It was Shirer who broadcast the first uncensored eyewitness account of the annexation of Austria. Shirer is best known for his books The Rise and Fall of the Third Reich, which has seen millions of copies in print and is considered a seminal work on the Nazi party and the war, as well as his book Berlin Diary.

Savvy is written by Ingrid Law. It costs $1.99 today only.

For generations, the Beaumont family has harbored a magical secret. They each possess a “savvy” -a special supernatural power that strikes when they turn thirteen. Grandpa Bomba moves mountains, her older brothers create hurricanes and spark electricity . . . and now it’s the eve of Mibs’s big day.

As if waiting weren’t hard enough, the family gets scary news two days before Mibs’s birthday: Poppa has been in a terrible accident. Mibs develops the singular mission to get to the hospital and prove that her new power can save her dad. So she sneaks onto a salesman’s bus . . . only to find the bus heading in the opposite direction. Suddenly Mibs finds herself on an unforgettable odyssey that will force her to make sense of growing up – and of other people, who might also have a few secrets hidden just beneath the skin.

Ingrid Law has sold shoes, worked in a bookstore, helped other people get jobs, and assembled boxes for frozen eggplant burgers. She and her twelve-year-old daughter live in Boulder, Colorado, in a lovely old mobile home that they like to believe is a cross between a spaceship and a shoe box. They enjoy writing on its walls and painting on its ceiling, and have two harps, a flute, and a ukulele, as well as a fondness for muffins. 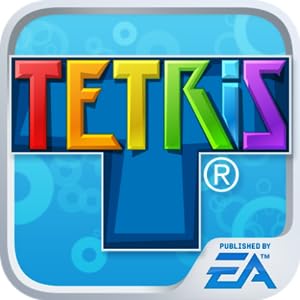 TETRIS is a small and well known game. It is free today only.

Play the puzzler that started it all.

Hundreds of millions of people around the world have played Tetris. Its simple, addictive gameplay spawned an entire category of video games, and trained a generation of very efficient packers.

Slide, rotate, and drop pieces into place with ease using the intuitive touchscreen interface. Feel the exhilarating rush of endorphins into your brain’s central nostalgia region when you fit a piece into just the right spot.

Play the classic game you know and love in Marathon Mode, and clear your way through 150 lines in 15 pulse-pounding levels. Plus, keep a piece on “Hold” if it doesn’t suit your fancy.
Face New Challenges

Experience a new twist on the original gameplay in Magic Mode. Achieve each level’s unique goal to complete it, and employ an arsenal of tools to clear away blocks:

Never played Tetris before? (Kids these days…) Get up to speed with a helpful tutorial that covers both standard Tetris rules as well as Magic Mode’s new features.

Track detailed statistics in both modes. And rock out to a brand-new remix of the original catchy theme.