PC Magazine is a great resource for expert reviews on electronics and computers.  PC Magazine was introduced in 1982, the year after IBM set the world into a tailspin with one of the first personal computers. PC Magazine chronicled through the evolution of computer technology.  In the 1980’s you could get a desktop for around $6000.  You can get one now with a lot more memory and capabilities for less than $1000.  The 1990’s were  a big decade for computers.  Microsoft took off several versions of its Windows operating system.  The internet went mainstream into businesses and homes.  Apple found it’s niche in graphic design software.  Amazon.com, Yahoo and eBay were introduced in the late 1990’s. more

The last decade has brought evolution of existing technologies by improving them and making them much faster.  The 2000’s have also seen the introduction of PDA’s and mobile devices such as cell phones, blackberrys, palm pilots and others.  The e-book reader market is taking off with the Kindle, Nook and the iPad coming along. The tablet computer market not is too far behind.

Over the years it has been PC Magazine’s job to cover the latest trends, analyze them and share the best results to the consumers so that they can make the most informed decisions in such a rapidly changing market.

PC Magazine stopped selling print editions of its magazine so it makes sense to get it for Kindle if you want a portable device to read it on.  However, based on the comments provided, it is highly recommended that the Kindle team add the images in for the articles.  Many of the articles are based on the reviews of an item and it is helpful to have a picture of that particular item to refer to. 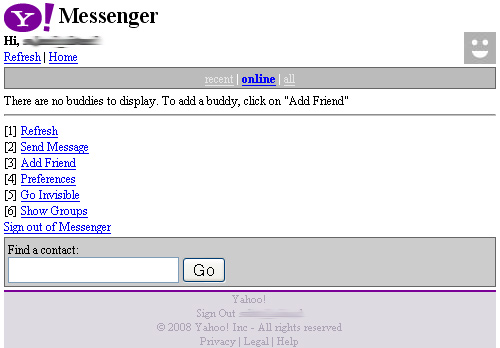 A few days ago we found out that is was possible to once again log into Yahoo Mail using the Kindle, turns out that you now access Yahoo Messenger with the Kindle using the Yahoo mobile service. How cool is that? not only can you read books and browse the web you can now check your emails, instant message your friends/family/colleagues and organise your schedule!

Staying logged into your Yahoo messenger account will cause a significant drain on the battery so its a good idea not to stay logged in for too long. Since the mobile Yahoo messenger site does not use flash or java, you will be required to manually refresh the page to see any new messages you have received.

Now, if only I could log into MSN this device would become perfect! Im sure someone out there is working hard on making that a reality. We already know that meebo.com doesn’t work on the Kindle becuase it uses flash so if anyone knows of a service which allows you to log into several instant messaging services which also works on the Kindle, please feel free to leave a comment.

If you want to try this out yourself, you can follow the link to the Yahoo mobile messenger site: