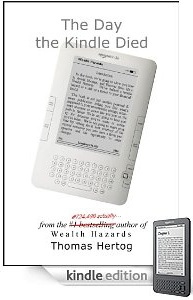 We all remember the controversy surrounding the removal of a somewhat disturbing manual for pedophiles in the Kindle Store a while back.  As much as I dislike censorship, you can’t really deny that that’s the sort of thing you don’t want getting associated with your brand name, so let’s call that a questionable but probably smart decision on the part of Amazon(NASDAQ:AMZN).  More recent controversy about removal of eBooks has come from a production from Thomas Hertog.

Hertog’s publication, The Day The Kindle Died, is a detailed account of the way he scammed the Kindle Top 100 list through manipulation of ratings and reviews.  According to his story, it took only about 45 days to get his earlier work, Wealth Hazards, to the top of the list of Personal Finance eBooks using scammed reviews and up-voting these reviews on a daily basis.  The point that the author seems to be trying to make is that since the “bestsellers” list is not entirely based on daily sales numbers, it is useless and therefore Kindle purchases are somehow wrong.  It’s an interestingly flawed position to be taking.

What brought this to our attention was not the fact that the author is the sort of person who would go out of his way to undermine the ratings system, but rather that Amazon temporarily removed both publications from their site while investigating what was going on.  It was a fairly unique situation, but this is still odd behavior even if both books have been restored to the marketplace(minus their fraudulent statistics, of course). Basically, the guy pointed out that the system could be manipulated, proved it, and then people were surprised when Amazon corrects the mistake after he makes his point.  I may be in the minority, but censorship as a concern doesn’t seem like it applies here.

Now, does he have a point about the value of the way the store ratings work?  Yes, and no.  Sales numbers are not the only way that eBooks, or even other items, seem to be able to make it to the Top 100 list.  When people are used to the idea of a bestseller’s list as an indication of the relative success, popularity, and reliability of a product, it can be a bit of a shock for some people to realize that there is another way to go with it.

This isn’t a bad thing, and it certainly doesn’t indicate the downfall of the Kindle Store or Amazon in general, it’s just a little bit unintuitive.  Overall, if you’re going to be looking for the most interesting instances of a certain type of book, you’re probably going to want the one that the most people are finding worthy of comment, right?  It might all be subjective, but that’s better than just sales numbers when you’re trying to figure out if a book is worth a download.  This could force Amazon to change their algorithm, but much more likely things will continue on just like they have been and we can hope that they’ll find people trying to screw with Kindle book numbers using these techniques more easily having a record of how it was done once before.