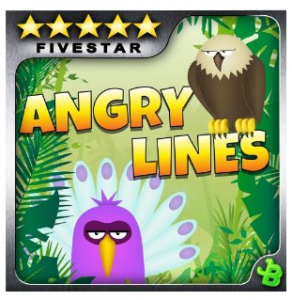 Angry Lines is a bird-matching game for the e-ink Kindles.  Once upon a time, there were flocks of happy birds living together on a tropical island.  A storm came and scattered them all.  After being separated, the birds got angry, hence the name Angry Lines.

All the player has to do is match up two identical birds: eagles, owls, parrots, and more, in order to advance to the next level.  That sounds simple, until you actually sit down and play the game.

Angry Lines gets challenging pretty quickly.  Not only do you have to match the birds, you have to find a way around the other birds to get to the correct match.  The game is set up like a grid.  As long as there aren’t any birds blocking your path, you can move your bird towards its match both vertically and horizontally.

The graphics are crisp and easy to see.  The birds definitely look angry!  The different kinds of birds are easy to distinguish, but finding matches that are not already paired up adds a new twist.

On the other e-ink Kindles, you can use your toggle button to move the bird to the intended spot. It is a good fit for the simplistic e-ink Kindle platform because it doesn’t require too much action other than maneuvering around.

If you are looking for an inexpensive strategic thinking game that is fun for all ages, Angry Lines is a great one to try.