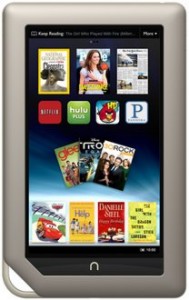 The competition in the 7″ Tablet market was obviously thrown into disarray by the arrival of the Amazon Kindle Fire and Barnes & Noble Nook Tablet devices.  Even if you completely set aside the service being offered in conjunction by either company, any moderately powerful Android Tablet in the $200-250 range is attractive.  Just look at how well the Nook Color did, even locked down with ridiculously few apps and a marketing campaign focused on reading.  What’s also rather clear, however, is that with the Kindle Fire getting the majority of the attention pre-launch, B&N needed to make an impression on potential customers.  They may have overdone it a bit.

The most obvious disappointment for Nook Tablet early adopters was the storage space.  One of the biggest draws in this case was the fact that they included twice the Kindle Fire’s storage space.  This is especially important given the huge emphasis on video viewing that’s been happening lately.  The Nook certainly offers more natively supported formats, so 12GB of available space to side load your library onto is great on paper.  As we’ve learned since then though, that’s not going to be happening.  Barnes & Noble decided that Nook Tablet owners would probably be needing to have around 11GB of that space blocked to outside content.  That’s less than 10% of what was promised, which means that the only people likely to ever get the most out of their new Nooks in this regard are the ones who root them.

Also related to the video viewing qualifications of the device is the quality problem.  Probably to set themselves apart from the Kindle Fire yet again, B&N advertised the new Nook as “The best in HD entertainment”, among a number of other similar claims.  Now, obviously this could not be the case.  Anybody who gave it a decent amount of thought already knew that, given the resolution of the screen if nothing else.  This sort of language has since been dropped from the Nook Tablet product page. Here you can read more about how to open HEIC file

The official response was that what they “really” meant for customers to understand was that they pull a higher quality video feed from Netflix than the competition and the message just got lost in translation somewhere. Where the Kindle Fire pulls the standard definition stream and fits it to the tablet, the Nook Tablet grabs the HD and downgrades it.  This does, admittedly, result in a better picture for those with the network reliability to support it and would have made sense to advertise.  Instead, they opted for what seems to have been deliberate misinformation.

It’s taken a bit of time, but corrections are being made to the advertising.  I think it’s important to make note of these early efforts to drum up preorders, though.  While the Nook Tablet is definitely a good product for the money, there’s something a bit off about this approach to selling it.  There is a big difference between fixing launch bugs and having to significantly modify your product descriptions to avoid deceiving customers.