Today Amazon offers My Mother Was Nuts by Penny Marshall just for $1.99

Most people know Penny Marshall as the director of Big and A League of Their Own. What they don’t know is her trailblazing career was a happy accident. In this funny and intimate memoir, Penny takes us from the stage of The Jackie Gleason Show in 1955 to Hollywood’s star-studded sets, offering up some hilarious detours along the way. My Mother Was Nuts is an intimate backstage pass to Penny’s personal life, her breakout role on The Odd Couple, her exploits with Cindy Williams and John Belushi, and her travels across Europe with Art Garfunkel on the back of a motorcycle. We see Penny get married. And divorced. And married again (the second time to Rob Reiner). We meet a young Carrie Fisher, whose close friendship with Penny has spanned decades. And we see Penny at work with Tom Hanks, Mark Wahlberg, Whoopi Goldberg, Robert De Niro, and Whitney Houston.Throughout it all, from her childhood spent tap dancing in the Bronx, to her rise as the star of Laverne & Shirley, Penny lived by simple rules: “try hard, help your friends, don’t get too crazy, and have fun.” With humor and heart, My Mother Was Nuts reveals there’s no one else quite like Penny Marshall.

Penny Marshall is an actress, producer, and director. From 1976 until 1983, she starred as Laverne DeFazio in the classic TV sitcom Laverne & Shirley. She went on to direct films such as Big (1988), the first movie directed by a woman to gross in excess of $100 million at the U.S. box office, Awakenings (1990), which was nominated for an Academy Award for Best Picture, and A League of Their Own (1992), which also made over $100 million in the U.S. More recently, she has directed episodes of United States of Tara (2009) and guest-starred on Portlandia (2011).

Also Amazon offers 3 books written by Francesca Simon, who is one of the world’s best-loved children’s authors and winner of the Galaxy Book Award in the United Kingdom. Each book in her best-selling Horrid Henry chapter book series contains four easy-to-read stories with hilarious illustrations by Tony Ross, and today only they’re just $0.99 each (80% off). Here is the list of the set:

Francesca Simon spent her childhood on the beach in California, and then went to Yale and Oxford Universities to study medieval history and literature. She now lives in London with her family. 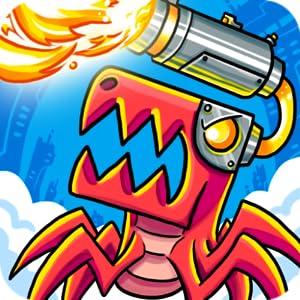 Velocispider is a free game for 1 day only.

Your delicious endangered eggs have attracted the taste buds of the evil CEO of the Robot Seafood Corporation. He will stop at nothing to feast on your eggs, defend them from his relentless army of aquatic robot beasts.

Protect your eggs through 20 levels of awesome retro arcade style action. Many different types of enemies will attack from many different patterns, keeping you on your toes the whole time. It is simple to pick it up and play for a few minutes, but so engaging that you’ll want to play the whole thing straight through!

Be careful: this game can take your real money from your pocket.