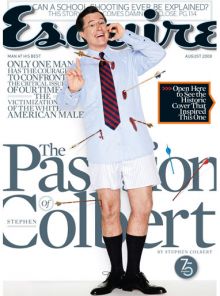 Esquire Magazine celebrates its 75th birthday this year. To celebrate this milestone Esquire has partnered up with a Cambridge, Massachusetts based technology company, E Ink Corporation (the same company which makes the Kindles e-ink display), to become the first magazine to be printed-or should I say manufactured-with an e-ink cover.

The special 75th anniversary issue will focus on exploring the ideas, people and issues that will be the foundation of the 21st century.

“This cover is both a breakthrough for magazines and an expression of the theme of our anniversary issue,” said David Granger, editor-in-chief of Esquire Magazine. Whilst the cover uses “rudimentary e-ink technology” primarily because the cost associated with having a high resolution e-ink display is still very high, Mr. Granger hopes this is only the beginning of an explosion in the use of e-ink technology.

Mr. Granger, also has high hopes for the covers place in history saying “I hope it will be in the Smithsonian […] Magazines have basically looked the same for 150 years,” adding “I have been frustrated with the lack of forward movement in the magazine industry.” – you can include the publishing and the newspaper industry’s to that also.

Whilst some might see this as a marketing gimmick, Esquire is hopeful that the technology behind the device will last, Mr. Granger thinks “The possibilities of print have just begun. In two years, I hope this looks like cellphones did in 1982, or car phones.”

Esquires publishers have had to invest a six figure amount in order to get the project off the ground, so a big-time sponsor was needed in order to turn a profit, Ford was brought in to help with some of the costs in exchange for a 2-page e-ink advertisement.

The Esquire team has been planning to use an e-ink cover for a long time, back in 2000, Mr. Granger visited E Ink Corporation in Cambridge for a technology demonstration, but conceded that it was too premature for magazines. In 2006 the technology had improved sufficiently that only limitation to creating an e-ink magazine was having a battery small enough to power it-and the associated costs-, so for the past 16 months Esquire has been working with a Chinese manufacture to create a battery which will fit inside a magazine, the battery is expected to last 90 days.

It would be interesting to see what magazine stands would look like in a decades time if the e-ink cover catches on. Magazine stands are already a visual assault on the eyes, every magazine is competing for you attention with bright colours and scantily clad women, one can only imagine the stands if they were filled with animated e-ink covers!

Now I suspect that the e-ink display will be a segmented type as opposed to a high resolution graphic type available on the Kindle, given the cost of manufacturing. The Esquire cover will probably have a few frames of animation or some flashing text – nothing fancy, but still quite cool. Esquire has an exclusive deal with E Ink Corporation on the use of e-ink technology in print through 2009, however only a 100,000 e-ink covers will be produced, they will only be available on Magazine stands and the 620,000 Esquire mail subscribers will get a printed copy of the issue.