Right now it is safe to say that the iPad is on top when it comes to tablets.  I’m assuming nobody genuinely thinks anymore that the Kindle Fire was ever about trying to bring down Apple’s device.  It is no surprise then that in a recent analysis of their web traffic impressions, the Chitika Ad Network found that 91% of tablet traffic on the web comes from iPads.

What was somewhat surprising was that for the first time we see the Nook Tablet beating the Kindle Fire in terms of use.  Since May, the Nook has jumped from making up 0.53% of all tablet traffic to accounting for 0.85%.  For just a month, that’s an impressive increase in presence.  The Kindle Fire saw no such increase and even seems to have fallen off slightly in the same period. 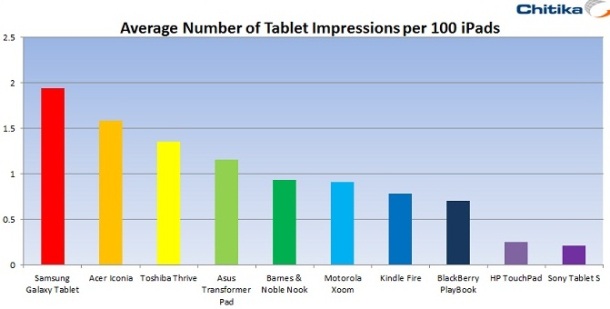 What does this mean for the two devices?  Unfortunately this data is hard to draw any real conclusions from.  Lacking any sort of information about data collection, we don’t even know as much about what devices we are talking about.  How much of the Nook’s internet presence comes from people running rooted tablets thanks to simple tools making use of the SD slot, for example?  That matters, since it is essentially a lost customer for B&N when they are selling their hardware at near-cost in order to lock people into their ecosystem.

Even if we assume that those users are completely removed, we are still left with a study that examines only web use.  Anybody who has spent time browsing the internet on either of these devices already knows that while pleasant enough for what it is, the browsing experience a 7” tablet offers will generally fail to impress.

I would be more excited to see information about impressions and click-throughs on advertising in popular apps across multiple platforms.  That would be likely to give us a better understanding of the comparison since just about everybody loads up some Angry Birds or Words With Friends from time to time.

With the iPad still providing about fifty times the traffic of its closest competition this is all really a minor point.  You just can’t expect a small device designed for media consumption to do the same job or generate the same interest as Apple’s more powerful and popular product.  They have nothing to fear from Android tablets in general right now, let alone the budget side of the market.

Clearly this data will be helpful for anybody who is interested in trying to target tablet users specifically when designing a web-based advertising campaign.  For the rest of us, however, there is not enough detail to be worth thinking too much about it.  It would be nice if the Nook Tablet suddenly experienced a huge boost in popularity since Amazon couldn’t help but push back by adding new products or software features, but that isn’t necessarily the case here.

Maybe the next generation of tablets, with Windows 8 competing against the iPad and a Microsoft-backed Nook line providing intense competition for the Kindle Fire, but for now things are pretty much on hold.