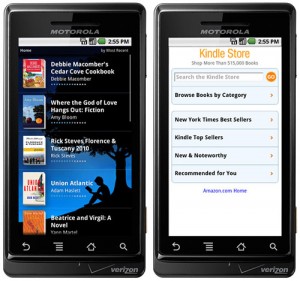 It appears that we have a major addition to the Kindle platform’s family coming up this summer.  Kindle for Android has been announced and issued its preview page, where interested users can look into the details first-hand and sign up to be notified the moment the application is openly available.  The features listed are basically those that one would expect:  Availability of purchased books across all Kindle platforms, Whispersync across your entire account keeping track of last page read and annotations, five font sizes to choose from, and a generally intuitive touch-screen page turning interface in either portrait or landscape mode.  All of the features we’ve come to expect from the Kindle Store should translate as well.

While it’s no secret at this point that LCDs aren’t quite as pleasant as eInk displays to read off of, the overwhelming sense of convenience and availability for most people in a day when cell phones go everywhere with us makes this a truly exciting announcement.  It also raises the question of what effect will a Kindle Android app have on the openness of development for the nook.  There was some excitement after the highly successful competing device’s last patch brought the first instance of Android app use and a great deal of speculation about what this could mean.  Perhaps this announcement is related?

It looks like Amazon (NASDAQ:AMZN) is looking to become the most cross-platform eBook reader on the market.

2 thoughts on “Kindle for Android Announced By Amazon”