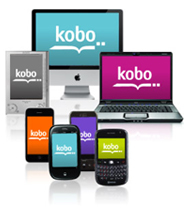 Fascinated as we are by the platform here, Kindle users are far from the only group to be inconvenienced by Apple’s in-app purchasing guideline enforcement.  Apple built the popularity of their iPads on the availability and functionality of apps being developed by other parties, only to change their minds once an ownership base was established.  Certainly totally within their rights to do, but more than a little unpleasant for both the app developers and users who are accustomed to better treatment.  Amazon has retaliated by releasing the Kindle Cloud Reader, which completely bypasses the iPad’s App Store, and they aren’t the only ones looking at the options.

Kobo, the leading international Kindle competition, has announced plans to follow in Amazon’s footsteps with an HTML5 Reading app of their own.  When it is complete, users should be able to read their Kobo purchases on any device with a web browser, effectively bypassing Apple’s restrictions.  You should even be able to save the app to your iOS device Home page for seamless integration.  As with the Kindle Cloud Reader, users will be able to sync their collections for offline browsing, which addresses the largest possible shortcoming of a browser-based solution to the problem.

The only major problem with apps like these is the loss of Apple App Store exposure.  To effectively bypass Apple’s fees it is important to already have a substantial user base, since random discovery is far less likely.  Existing Kobo customers will have little problem, and will likely welcome the chance to make use of the store again without the price increases that would have been necessary to profitably continue operation within Apple’s guidelines.  New users will almost certainly be harder to come by.  We can expect to see continued support for the Kobo iOS app as a result, for exposure’s sake if nothing else.

This is not the only obstacle that Kobo has had to face recently.  With the end of Borders, their US distribution partner, exposure will be harder to come by in the current largest eBook market.  Although they remained separate companies, Borders was directly linked to the Kobo eReader in the minds of consumers for having been the first ones to bring to to the US.  Regaining that kind of presence will be a slow process.

Outside the US, the Kobo Store is reported to have perhaps the best selection of eBooks currently available.  Due to ongoing licensing right disputes, the Kindle Store is not yet always able to consistently provide the same level of service that Kobo has managed to over such a large number of markets.  The release of this HTML5 app should do them a great deal of good in expanding their lead, given the number of Tablet PCs hitting the market recently.  This may allow readers to enjoy the service even in countries where localized selections are not currently available and shipping the Kobo eReader itself is problematic.

We can expect the official release of the new Kobo app later this year.