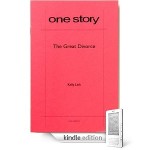 One Story is available for Kindle and Kindle DX for $1.49 a month.  The schedule for this short story literary magazine is every three weeks, so in the long run, the price is pretty reasonable.

One Story began in 2002, and has won many literary awards such as the Best American Short Stories, Best American Non-Required Reading and The O. Henry Prize Stories.

We believe that short stories are best read alone. They should not be sandwiched in between a review and an exposé on liposuction, or placed after another work of fiction that is so sad or funny or long that the reader is worn out by the time they turn to it. – One Story

This is a great philosophy, especially regarding readers who hate flipping through ads in magazines or for ones who are intimidated by 500 page books.

“At a time when literary writing seems like a dying art, when little magazines are folding left and right, when publishers bemoan the sinking bottom line, here lies a spot of hope…It is called One Story.” – The New York Times

The magazine features up and coming writers fiction writers.  The latest story in the June 20th edition of magazine is called “The Puppet,” by Reif Larsen.  The story is set in Sarajevo.  The author offers a great discussion on his work and his experiences that inspired him to write it.  more

I think it is neat to see the background behind the characters and the setting of the short story through the eyes of the person who wrote it.  This is true especially since the “The Puppet” took place in a war torn area that touched the author personally.

One Story is a great addition to the Kindle collection because of its portable and lighthearted nature.  It does not include graphics, which seems to be a hang up with other magazines on the Kindle, and it is like getting a new book every three weeks. It is meant for the subways, the bathtub, the park, and anywhere else ideal for a quick read.

1 thought on “One Story for Kindle”