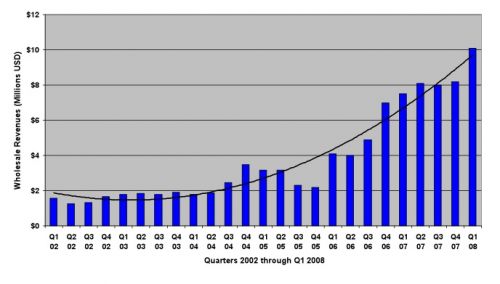 I think the most interesting results will be Q2 2008, if we see another 20% spike in sales like we saw in Q1 2008 then it’s quite reasonable to theorise that the Kindle is having an effect on e-book sales in the US.

Bear in mind that The International Digital Publishing Forum only collects data from 12-15 trade publishers and that the real retail numbers could be as much as double the figures reported above.

A commenter, rizchamps, from the Silicon Ally Insider article on the report writes:

So if we ascribe all the incremental revenue from $2.5M to $3.1M = $600K to Kindle, and assume that $3 a piece wholesale cost, that would be 200K ebooks currently in service. In addition, assume that those with kindles are early adopters who would buy more than 1 book, say 10 book per kindle for the three months period, that would put the active kindle number around 20K.

Then, those 20K in service probably was mostly sold during Xmas season, give it 15K, meaning for an average month, there are 5K kindles entering service (summer time could be less because Kindle has not proven itself on the beach yet). That would translate into annual sales of 70K units(generic), give it a multiple YOY 30%, that would be 80K.

Of course all this is still guesswork and we wont know for sure unless Amazon releases Kindle sales figures. Do you think the Kindle is having an effect on e-book sales?