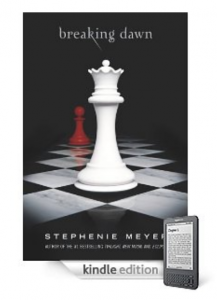 At last, we reach the final installment of the Twilight series for the Kindle: Breaking Dawn.  Bella and Edward get married, and we hear a good bit of the story from Jacob’s point of view.  It appears that Breaking Dawn was written for a more mature audience considering the more graphic depictions of certain events in the novel.

The reviews for Breaking Dawn were all over the place.  Some say it is the worst book in the whole series, and others say it is awesome.  So, it really is just a matter of personal preference I guess.

“Book four of the series, Breaking Dawn was an interesting turn of events. I found myself being surprised in some occasions, and I felt like it was an overall good book. I know that it catches a lot of flak, but the book is good. It is interesting, well-written, and has a developed plot.”

Here is a review that pointed out an issue that was brought up multiple times in other posts, which is the fact that about half of Breaking Dawn was written from Jacob’s perspective instead of Bella’s.

“I could not put the books down. I read all four in a month. The only thing that i don’t like is the wolf thing and how the fourth book focuses on Jacob. Given what it was about, i feel she should have had something in there from Edward’s point-of-view. Overall, love them!!!”

This reviewer brought up a good point.  This series is meant to be fiction, and often in life, things don’t turn out the way we want them to, but fiction gives us a means of escape.  It also fuels our imagination.

“I was a little worried about the second part being told from Jacob’s perspective, but suprisingly it was very good. I know in life you don’t always get what you want, but that’s why this is fantasy/fiction. Bella got everything she wanted.”

So for those of you who have read Breaking Dawn, do you think it provided a good ending for the series?  If not, what would you change about the ending?