It’s really been a good stretch here for Kindle games.  Especially considering it isn’t exactly a device that lends itself perfectly to the feature.  There’s been some real innovation.  Word games were obvious, of course, but being well done was a surprise in some ways.  Zork was amazing, to me at least, even more so because it wasn’t an official development.  Now, finally, we get a bit of puzzle game mixed in.  An independent game developer called Spry Fox put out an addictive little way to lose track of your leisure time called Triple Town.

At its heart, it’s a simple mechanic.  You have a grid which you have to build things on to develop your land.  You build items( trees, flowers, houses, cathedrals, etc.) by placing a single freshly drawn tile on the board each turn from what seems to be a fairly randomized set.  You can also run into problems when the tile you have to place turns out to be something unsavory like a Barbarian.  Let’s face it, pro-Barbarian games are hard to find, so this came as no surprise to anybody. It’s a simple little game with an easy to understand interface that it should take you no time at all to learn the basics of.  I would certainly not call it easy, however, and the replay value is enormous.  Definitely worth my $2.99 for hours of enjoyment. 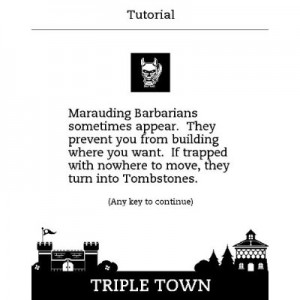 Still, I’m just some guy writing about Kindle games on a site called BlogKindle.  There’s at least a passing implication, mostly unjustified though I maintain it is, that there’s the potential for bias.  Rather than expect anybody to take my word for it, let’s look at the reviews so far:

First of all, if you have Kindle 2 you can safely purchase the game because it works great on this device. It even loads a bit faster than the other Kindle 2 games I have purchased.

Triple Town is a pretty fun puzzle game. You get a board subdivided in to squares, in which different kinds of objects appear. You need to create groups of similar objects, which will turn them into more valuable things (grass turns into a flower, which, in turn, transforms into a bush after you have accumulated three or more of them.) There are also wild cards (crystals), which can be substituted for any object. Sometimes, marauding barbarians appear and prevent you from placing objects in the cells where you want to place them. They can also move randomly, so make sure you place the barbarian in a space where even if it moves, your entire game will not be too compromised by that. The best thing is that you don’t have to remember all these things because you will keep getting hints as to each object’s value and function throughout the game[…]The graphics are quite nice, the tutorial is very clear and detailed. The game is fun and relaxing and works great on Kindle.

I was hesitant to try this game because it had just been released and there were not any reviews on it other than some design type technical ones off this site. I downloaded it this afternoon and spent about an hour playing. It is easy to learn and makes me think without overtaxing my brain after working all day. I’m hooked. After reading about the development of this game, I hope Spry Fox will work on making more games just for the Kindle (as long as they are compatible with my Kindle 2.)

This is the type of game that is very easy to pick up and learn. It is also quite addicting, as I spent a few hours playing it the first day. This is also one of those games that will take a long time to master, as there is a lot of strategy involved, so I expect that I will be coming back to this game again and again. Well worth the inexpensive price!

This is a fantastic little game that is so easy to play and replay that you might never read another book on your Kindle! Every game you play, you’ll refine your strategy and can get further than last time. So far after 5 hours or play, I’m able to get to Boom Town fairly easily, but I have a new idea on how to get further next time (read: right now!)

So far, not a single review has popped up under four stars and though these here are the most “helpful” according to the review reviewers, they are certainly not the only ones commenting.

What it comes down to would seem to be that if you’re a puzzle game enthusiast you will probably get a kick out of Triple Town.  It’s cheap, easy to learn, hard to master, and will almost certainly be appreciated by those who give it a chance. I suppose if you’re looking for a sure thing and don’t want to try something unusual, there’s always Minesweeper, but I doubt I’m the only one getting sick of looking for mines after all these years.  Grab your Kindle, head to the store, and give it a chance.  Given the asking price, there’s not much room for regrets even if you don’t get hooked.

3 thoughts on “Triple Town for Kindle”