Today’s Daily Deals consist of 5 Dystopian Fiction books for Young Adults and a game “Tiny Village“. The game you can download for free while each novels cost $1.99 today only. If you’re a fan of the The Hunger Games this is great deal for you. From the disease-ravaged American landscape in The Eleventh Plague–a Suzanne Collins favorite–to the other-worldly seaside of The Scorpio Races, all of today’s books are masterfully imagined.

From the #1 New York Times bestselling author of Shiver and Linger comes a brand new, heartstopping novel. With her trademark lyricism, Maggie Stiefvater turns to a new world, where a pair are swept up in a daring, dangerous race across a cliff–with more than just their lives at stake should they lose.

Some reviews on this book:
“Masterful. Like nothing else out there now.” – Kirkus Reviews, starred review
“Stiefvater’s novel begins rivetingly and gets better and better…all the way, in fact, to best.” – The Horn Book, starred review
“A book appealing to lovers of fantasy, horse stories, romance, and action-adventure alike, this seems to have a shot at being a YA blockbuster.” – Booklist, starred review
“An utterly compelling read.” – Publishers Weekly, starred review

In an America devastated by war and plague, the only way to survive is to keep moving.

In the aftermath of a war, America’s landscape has been ravaged and two thirds of the population left dead from a vicious strain of influenza. Fifteen-year-old Stephen Quinn and his family were among the few that survived and became salvagers, roaming the country in search of material to trade for food and other items essential for survival. But when Stephen’s grandfather dies and his father falls into a coma after an accident, Stephen finds his way to Settler’s Landing, a community that seems too good to be true, where there are real houses, barbecues, a school, and even baseball games. Then Stephen meets strong, defiant, mischievous Jenny, who refuses to accept things as they are. And when they play a prank that goes horribly wrong, chaos erupts, and they find themselves in the midst of a battle that will change Settler’s Landing forever.

A thrilling tale of adventure, romance, and one girl’s unyielding courage through the darkest of nightmares.

Epidemics, floods, droughts–for sixteen-year-old Lucy, the end of the world came and went, taking 99% of the population with it. As the weather continues to rage out of control, and Sweepers clean the streets of plague victims, Lucy survives alone in the wilds of Central Park. But when she’s rescued from a pack of hunting dogs by a mysterious boy named Aidan, she reluctantly realizes she can’t continue on her own. She joins his band of survivors, yet, a new danger awaits her: the Sweepers are looking for her. There’s something special about Lucy, and they will stop at nothing to have her.

A two-fold tale of grief and hope loss and love told as only Alice Hoffman can.

When her family is lost in a terrible disaster 15-year-old Green is haunted by loss and the past. Struggling to survive in a place where nothing seems to grow and ashes are everywhere Green retreats into the ruined realm of her garden. But in destroying her feelings she also begins to destroy herself. It is only through a series of mysterious encounters that Green relearns the lessons of love and begins to heal as she tells her own story.

As she heals Green lives every day with feelings of loss. Her family is gone the boy she loves is missing and the world she once knew has been transformed by tragedy. In order to rediscover the truth about love hope and magic she must venture away from her home collecting the stories of a group of women who have been branded witches for their mysterious powers. Only through their stories will Green find her own heart’s desire.

It’s the near future – the very near future – and the fossil fuels are running out. No gas. No oil. Which means no driving. No heat. Supermarkets are empty. Malls have shut down. Life has just become more local than we ever knew it could be.

Nobody expected the end to come this fast. And in the small town of Spring Valley, decisions that once seemed easy are quickly becoming matters of life and death. There is hope – there has to be hope – just there are also sacrifices that need to be made, and a whole society that needs to be rethought. 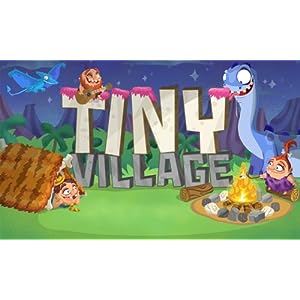 It Takes a Village to Make a Village

Join more than a million fans playing one of the top-rated games, Tiny Village. Can you develop your small settlement into a thriving prehistoric village?

PLEASE NOTE: This app lets you purchase digital content using actual money. You can configure parental controls for in-app purchases, which will require your Amazon account password or a 4-digit PIN, by tapping the Menu icon and then Settings.

Rupert and Regina, like most prehistoric folks, are at the mercy of the elements, often ending up as lunch for rampaging carnosaurs. During one particularly frenzied chase, the couple hides behind a huge rock that possesses special powers, frightening a pursuing dinosaur and giving Rupert and Regina a sense of security. So, they decide to stay near their Magic Rock and make a home for themselves, and they need your help to build their village.

The game offers four main resources–rock, food, trees, and fur–plus three other resources that require a refinery: stone, lumber, and woven fur. You need to develop your village with its shops and resource buildings, as well as gradually upgrade your Magic Rock, to access some of the top-level production items.

Build a pre-historic village in which you harvest resources, build homes, and construct cool shops. Assign your villagers to work different jobs and use the seven different resources to craft tools, clothes, candy, and more. Upgrade the Magic Rock at the center of your town to unlock beautiful buildings and gorgeous decorations. Follow the quests through the tutorial, then pick and choose as several quests open at once. Arrange your buildings, farms, and decorations however you wish.