With commercially viable Kindle Color eInk displays announced in November, Mirasol displays being around for a while and Barnes & Noble Nook Color being widely perceived (though not by me) as first color eReader, it seems inevitable to me that Kindle Color is going to be released sometime soon.

Therefore I would like to hold a small guessing contest. The idea is to guess how will be called when it is released. While Kindle Color seems to be most obvious idea, there’s not telling how Amazon will end up naming the device. It seems reasonable that Kindle part will stay since it’s a well established brand that is recognized by customers and heavily advertised. I’m open to suggestion about the second part. So I propose a following two stage contest:

So, happy guessing! I’m looking forward to these comments! For the first time in a while, we have some real hope for a decent full-color eReader in the near future.  Sure, the NOOKcolor will be out soon, but nobody really cares that much.  E Ink, maker of the current amazingly popular screens for the Kindle and nook, has announced a new display technology that they have dubbed Triton.

E Ink Triton is a color active matrix imaging film that manages to retain all of the benefits of their previous products(such as the monochrome E Ink Pearl screen found in the current generation of the Kindle) without limiting the display options when it comes to illustration.  Users can expect to retain the direct sunlight readability, quick page turns, amazing battery life, and durability that they have come to expect and hopefully quite a bit more, depending on how companies like Amazon(NASDAQ:AMZN) manage to adapt the technology for improved user experience.

This comes with the usual cautions, of course, before people get too excited.  Namely, this is not an LCD screen.  This means that you cannot expect everything to work precisely the same way a standard computer monitor would.  You will not be watching video on it, nor will there be a back-light.  It is an amazing leap forward for eReading technology, not just another potential selling point for entries into the tablet race.  Reflecting on that point, if this works well and is adopted for use in something like the Kindle, there will really no longer be any grounds for complaints about usability from people wanting anything short of a full-function tablet.

This advance bodes well for the future of eReading and will definitely tie in well to such things as the recent push by Amazon to get periodicals published on the Kindle platform.  I know that we won’t be seeing a color Kindle by the end of this year, but now that it appears to be a practical inevitability, the possibilities are abundant.

There’s a great deal of talk floating around lately about the potential for a color Kindle device by the end of this year.  It’s always been something of a given that a color display with the positive attributes of eInk would be developed and put into production at some point, but few believed it could realistically happen before the end of the year.  Now, however, Mirasol Displays is claiming to have a working 5.7″ color eInk-like display in production and on order to a number of clients with delivery expected toward the end of this year and the beginning of next. Further comments revealed that while the earliest adopters will be eReader producers, the fact that these new screens can display 30 frames per second, operate in full sunlight, and and support touchscreens makes them perfect for cellphones and other portable technologies.  If these screens live up to their potential and affordable production is already beginning, this could well breathe even greater life into products like the Kindle, allowing them to retain all their current usability and address naysayer complaints about refresh rate and monochrome displays all at once.  All that remains to be seen is where things go from here in terms of price, availability, and whether or not Amazon(NASDAQ:AMZN) is among the early adopters.

Tuesday, at the annual Amazon(NASDAQ: AMZN) shareholders meeting, Jeff Bezos made some comments about the state of the Kindle and what we can expect for the future.  While it may come as a surprise for some, the goal is consistency and refinement rather than revolution.  Many feel that the Kindle should be making every effort to become some sort of eInk iPad in order to survive, but Bezos emphasized the presence of the Kindle as a device for “serious readers” and insisted that this is not meant to be a multipurpose device so much as a specialty tool with a distinct purpose.  Future plans for Kindle development may include the color screen that some have been pushing for, but certainly not the next model, to judge from his comments about what a complicated technology it is to get right.  While it would, of course, be simple to make a device with a color LCD display, it would run counter to the purpose of the device; namely to create a reading device for those who love reading.

So what can we expect from the new Kindle?  It’s pure speculation, but I’d say we can look forward to a more refined UI, faster refresh rates, a lighter form, and a better screen-to-frame ratio.  Let’s not dwell on what gimmicks and alternate purposes we might want to add in and focus on what matters.  Namely, that the reading experience be as clean, immersive, and enjoyable as possible. Qualcomm is funding the development of a new type of display technology called Mirasol and it is being touted as the future of eBook readers. That means it will replace the e-Ink technology that our beloved Kindle uses. So how does it work and why is it (reportedly) so much better?

Mirasol has been developed by mimicking a feature that makes the butterfly’s wings shimmer. It uses no back lighting, just like e-Ink and uses incidental light to reflect it back through a special layer. This layer is made up of multiple microscopic membranes that can be change through electric current. Once they change, they remain static in that state until another electric charge causes them to change again. This means they do not use electricity during a period of no change.

Their main advantage is that these membranes can produce the three main colors used in modern color displays – Red, Green And Blue (RGB) – and hence can produce a vibrant colored image. They also produce very impressive blacks (at least in theory) because in their closed state they reflect no light at all and have no other source of light.

Due to their design, they are able to run higher frame rates, thus making smooth videos a possibility on the display. Currently, pushing the frame rate up on the e-Ink would cause it to consume more battery.

That is because e-Ink uses tiny microcapsules that have three states – Black, white amd mixed. Changing them through negative and positive charges creates the same effect as LCD pixels. But since they contain physical particles, they do not need any backlighting. But making them support RGB would require highly specialized particles and higher frame rates would require much more current.

How this will affect eBook readers is still debatable but if it does become viable, then Amazon might consider switching. We just have to wait a bit more to see how it pans out. Qualcomm intends to have it in the market by the end of 2010.

While Pixel Qi on their website explicitly states that their displays are not based on eInk technology and that they are not affiliated with eInk Corporation this piece of news is highly related to eInk, because potentially we may have a eInk competitor here. 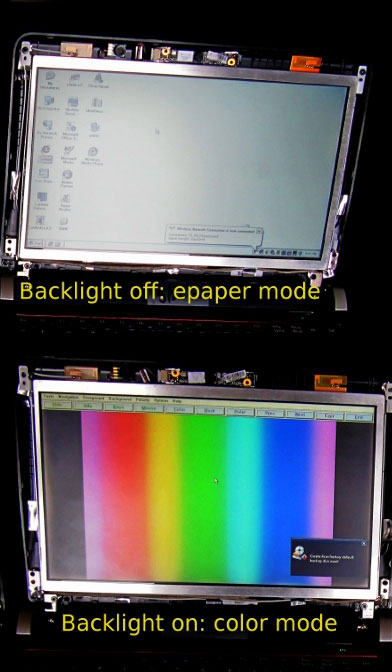 It is a display which according to Pixel Qi is extremely cheap to build from standard LCD display components and in fact it is for the most part an LCD display. With one exception – it can be switched to reflective mode. In this mode it consumes much less power than ordinary LCD display would and becomes monochrome but it can potentially display 3x as many pixels.

According to Pixel Qi consumers will see these displays in notebooks and netbooks by the end of 2009 and in “other devices” sometime in 2010. It looks like it’s easy to integrate this technology into existing designs since according to nerdword, Pixel Qi engineers rigged couple of retail-purchased laptops with their new display with seemingly little effort.

While this technology is mainly geared towards netbooks, notebooks and cellphones to make them usable in the sunlight (another interesting piece of news being Pixel Qi planning to supply displays for $75 laptops), it’s quite possible that much cheaper products price along with acceptable power consumption (though still much higher than eInk which is based on electrophoretic technology) and ongoing developments in battery technology may produce eBook reader that will run for several days on one charge, be usable in sunlight and cost less than Amazon Kindle. 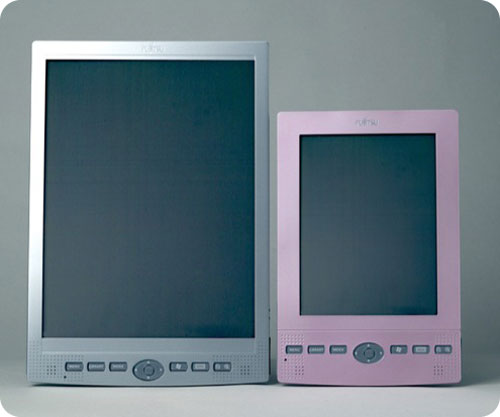 Although some news sites might call this device a “Kindle Killer”, it’s obviously not that. First of all it’s geared heavily towards Japanese market and Japanese users. Secondly, it is not hooked to Kindle Book Store which is crucial to Kindle‘s success. My personal belief is that Kindle would have been successful even without eInk technology though maybe slightly less. And thirdly even 8″ version costs around $1,000 which is to high for “eBook reader for the masses”