Outspoken, brash New Yorker Sammy Greene needs a second chance. Fired from her job as a Washington TV producer, her midnight to 3 am show Sammy Greene on the LA Scene at a small progressive radio station soon has Sammy ruffling the feathers of a popular Orange County Congressman. And everyone is listening. December, 1999. 10 days before the new millennium. Already on edge with Santa Ana devil wind fanning fires threatening to engulf the city and Y2K looming, Sammy’s callers imagine Armageddon – the perfect setting for a rogue CIA operative to manipulate fears as cover for his deadly plot. A young woman’s burned body identified as the wayward daughter of old friend, Gus Pappajohn spurs the ex- campus cop to join Sammy in what may be a murder investigation, along the way exposing the seamy underbelly of Tinseltown. If Sammy’s not careful this time, someone will make sure she’s off the air for good.

Some words about the Authors

Deborah is a physician, healthcare consultant, and author of five award winning medical mystery/thrillers, three co-authored with her husband, Joel. Linda is a physician-broadcaster-author and a Clinical Assistant Professor of Pediatrics at UCLA. Deborah Shlian and Linda Reid are also authors of Dead Air, which won top honors in the Thriller category of the National Indie Excellence 2010 Awards. 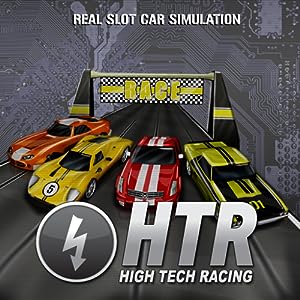 HTR High Tech Racing is a game for your Kindle Fire. Today only you can get this game for free.

The Need for Speed

High Tech Racing (HTR) is a slot car racing simulator; a virtual version of the classic toy from the 80s and 90s. HTR offers three different difficulty levels and 18 tracks, including several challenges such as loops, jumps, crossroads, narrows, and high speed curves. You can even build your own tracks with the highly intuitive Track Editor. Choose from three in-game visualization modes, from third-person perspective to in-car camera.

With realistic physics, HTR offers an adrenalin-packed racing simulation experience. With a single finger, you control the acceleration to keep your car on the track. There are tons of cool items to unlock including cars, electric engines, tires, and chassis to optimize your car. There are more than 440 possible configurations to test on each track.

Race freely on “Quickrace” mode and practice for the real challenge. Send your best race times and see your time in comparison to others players from around the world. Keep your records updated and prove you are the fastest on all tracks!

PLEASE NOTE: This app lets you purchase digital content using actual money. You can configure parental controls for in-app purchases, which will require your Amazon account password or a 4-digit PIN, by tapping the Menu icon and then Settings.