Each week we go through the top sellers on the list and give you our top 3 picks so to give you can get an idea of what to download for your Kindle. You can browse through The New York Times best sellers list on Amazon.com

Here are our top 3 books of the week followed by the top 5 best-selling books by category;

James Patterson and Howard Roughan have produced another winning beach read guaranteed to keep the pages turning. SAIL is a stand-alone novel instead of one of his series (Alex Cross, Women’s Murder Club), and has the added facet that everyone is at risk in this one. Nobody has to come back for the sequel, and some of the characters don’t.

Cardiac surgeon Anne Dunne has been stressed out by the twists and turns her life has taken. Her husband has died and she barely held it together. Then she got swept off her feet by Peter Carlyle, a dashing attorney. They’ve been married for a couple years, giving Anne time to heal some of her hurts and get her feet solidly back on the ground.

I like Patterson’s books for the sheer velocity of the story. He doesn’t provide more than a skeletal background for his principle characters, but that’s all that’s needed to understand the machinations he puts them all through.

Although a lot of Anne’s emotional turmoil is glossed over in the novel, I still felt her pain and uncertainty. But there simply wasn’t time to dwell on Anne’s loss because things constantly happened in the book. The authors introduced one vicious turn after another, and the Dunne family became more and more endangered.

However, the furious plotting robbed the characters a little. Anne organized the sailing vacation for her three children because she felt the family was falling apart. Everyone who has a busy family has felt that stress. Oldest son Mark has a drug problem, Carrie is suicidal, and Ernie has become strongly anti-social. These issues were introduced in a straight-forward manner, then resolved almost instantly. I feel I missed out on some of the character growth and interaction with the headlong pacing of the book, but I couldn’t stop turning the pages, which is exactly what the authors designed the book to do.

I really liked the character of Jake Dunne. He stepped onto the page and became real to me at once. He’s the solid kind of guy that will always see things through no matter how messy they get. But, like all of the characters in this novel, he has his secrets too.

Peter Carlyle, Anne’s new husband, turns out to be one of the blackest hearted villains I’ve seen in a while. He’s only out for himself. His relationship with his much younger girlfriend Bailey really sets the tone, and readers will learn to hate this guy, and fear his single-minded determination.

The international hitman Carlyle hires nicknames himself The Magician because of the ease with which he can make people disappear. He’s cool and calculating, and fills the story with menace.

Lost at sea, injured and dysfunctional, the Dunne family’s struggles will pull most thriller readers through to the end in a single sitting or two. They won’t be able to put the book down as the authors pile on one surprise after unexpected twist after impending doom. SAIL runs before the wind as a perfect beach read now that summer is upon us. – reviewed by Mel_Odom

If you want to get away with murder go to Italy. The police in Italy have been chasing the serial killer, The Monster of Florence, for many years. Many people have been suspected of the murders and many have been imprisoned only to be set free when yet another murder occurs.

Although the book title states “A True Story” and I am sure it is a true story it is hard to believe that government officials, police officers and judges can act in the manner described in this book. Couples have been murdered over the years when parking in secluded spots. The murders are vicious and cunning.

Mario Spezi wound up eventually accused of being The Monster and Lincoln Child came under suspicion and had to leave Italy.

The police procedures in Italy are so unusual almost anyone can be arrested for almost anything and not even be given the benefit of knowing what they are accused of or who their accusers might be. It seems in the Italy described in this novel no one is safe from prosecution.

The book provides a timeline of all the killings as well as a cast of secondary characters in order of appearance which is very helpful in reading this book. The Italian names are confusing if the reader is not familiar with Italian but the timeline and character list help to keep everything straight.

The lengths that Lincoln Child went to in order to help free Spezi when he was imprisoned is a definition of what real friendship is all about.

Wisdom of Our Fathers: Lessons and Letters from Daughters and Sons (by Tim Russert) – Number 8 in Hardcover Nonfiction 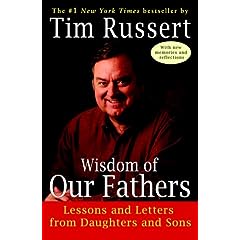 In 2004, Tim Russert wrote his first book (about him and his hard working dad, and the amazing example that he set for Tim everyday) and it struck a chord with so many people. He then was inundated with emails about their own dads from people who were touched by that book. Tim has compiled some of the emails and letters together to make this book (60,000 were received).

Some of the common threads in these letters were that these fathers were not superheros, but normal people and the number one gift they gave all their kids was their time. It’s all about the small moments, encouragement and simple things that to kids, is better than all the money they could have been given.

One funny example is a guy writing in about his dad who was diagnosed with prostate cancer and would not do any treatments for it, but wanted to stay around and ‘romance’ his wife. Over 8 years later, the father is sending his son the obituary for the oncologist who diagnosed him in the first place.

A girl called Kerry grew up with a stutter, and all it would take for her to stop was her dad just taking her hand and telling her it’s OK and that was all she needed.

There are so many heartwarming and fun and moving stories in here that make you appreciate what you have (or had) and if you have a strained relationship with your dad, this might give you a chance to correct what needs to be fixed. This is such a great book and I thoroughly enjoyed it. I think everyone can gain something from reading this. It also will make a great gift to your dad, husband or son for Fathers Day. – reviewed by Little Miss Cutey

* These reviews are taken from Amazon.com customer/editor reviews and do not necessarily reflect the views or opinions blogkindle.com

Hardcover Fiction
1. FEARLESS FOURTEEN, by Janet Evanovich
2. SAIL, by James Patterson and Howard Roughan
3. THE HOST, by Stephenie Meyer
4. CHASING HARRY WINSTON, by Lauren Weisberger
5. LOVE THE ONE YOU’RE WITH, by Emily Giffin

Hardcover Nonfiction
1. WHEN YOU ARE ENGULFED IN FLAMES, by David Sedaris
2. WHAT HAPPENED, by Scott McClellan
3. THE MONSTER OF FLORENCE, by Douglas Preston with Mario Spezi
4. ARE YOU THERE, VODKA? IT’S ME, CHELSEA, by Chelsea Handler
5. BIG RUSS AND ME, by Tim Russert

Paperback Nonfiction
1. BIG RUSS AND ME, by Tim Russert
2. THREE CUPS OF TEA, by Greg Mortenson and David Oliver Relin
3. WISDOM OF OUR FATHERS, by Tim Russert
4. THE AUDACITY OF HOPE, by Barack Obama
5. EAT, PRAY, LOVE, by Elizabeth Gilbert

Paperback Advice
1. A NEW EARTH, by Eckhart Tolle
2. THE POWER OF NOW, by Eckhart Tolle
3. SKINNY BITCH, by Rory Freedman and Kim Barnouin
4. WHAT TO EXPECT WHEN YOU’RE EXPECTING, by Heidi Murkoff and Sharon Mazel
5. YOU CAN HEAL YOUR LIFE, by Louise L. Hay