Interead has released new Cool-er models at CES in the hopes of finally being able to  defeat the Kindle in its own game. While that might be just a pipe dream for this spiffy little start up (without things to match the Whispernet and the International Kindle), they sure are stepping things up in their bid to provide everyone and their brother with eBook readers. Their objective is simple — to make eBook readers for the masses, to become the ‘iPod’ of eBook readers. Whilst I would not usually say that aspiring to achieve the success and ubiquity of another company’s product is a worthwhile dream, I think we can let ’em have it as long as it is the market changing iPod series.

They already had an iPod-like reader (much bigger in size thankfully), called the Cool-er. It received some mixed reactions from reviewers and was judged to be overall a worthwhile product for the price (which was lower than the average eBook reader). Now, at CES 2010, they have revealed two new models that extend the Cool-er line of readers to 3 models. The existing Cool-er is to get a 3G update and we now have a new model called the Cool-er compact. The Compact is a slim-little 6″ device that really focusses on being sleek and stylish. The iPod-inspired track wheel has been moved to the center and is flanked by two soft buttons. These three are the only embellishments on the face, which gives the reader nice and clean look. It has 2GB onboard storage and has an SD card slot for expansion. At just 10mm in thickness. this is supposed to be the eBook reader with the smallest footprint of all!

Another model that is supposed to come out is the Cool-er Connect. It will be a touchscreen version of the device that will have WiFi onboard with over the air downloads at hotspots all over the country.

There’s a new Cool-er Reader coming, and it’s supposed to give Amazon a run for its money.  According to the Mirror, the new device will not only have wireless, but also a full color screen.  And possibly a touchscreen.  All from a company that has made a profit selling budget eReaders.

Further details won’t be released until CES in January, but I have a feeling that any rumors surrounding the device are way overblown.  If the new device is still in the budget range and does feature everything its supposed to, then it wouldn’t be an exaggeration to call it a Kindle killer.  But I’m not sure how Interead could possibly pack in more features than the Kindle and still beat the Kindle on price.

It is possible that Interead is planning something that isn’t an eInk device at all, but something with LCD.  Of course, that would stretch the definition of eReader since the device would feel like a tablet PC with most its features missing.  I could be wrong though, and it might be possible that Interead comes out with something that is a mind blowing success.  Especially now that Coolerbooks has gained additional support from Google.

If Interead is planning a color eInk device, then Amazon may also have a color Kindle around the corner.  Amazon has been waiting on color because the quality of color displays from E-Ink Corporation isn’t up to their standards.  Since everyone is basically using the same E-Ink technology, if one company can do color others probably can too. 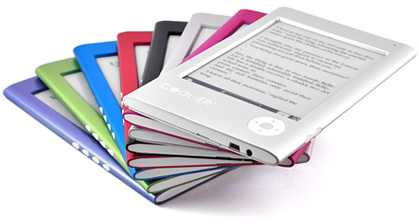 Interead’s attempt at a Kindle-killer, the COOL-ER reader, begins shipping this month.  Designed in a style that clearly mimics the iPod Nano, it seems that Interead hopes to fill the niche of a stylish, more “hip” eReader.  The screen is roughly the same size as the Kindle 2, but at only $249.

The drop in price does have a cost, however, as the COOL-ER lacks some of the Kindle’s functionality.  Besides the absence of text-to-speech or a keyboard, the most obvious feature missing is any form of wireless.  While Interead does have its own eBook store, it doesn’t run any kind of whispernet like service and all connections to the reader are through USB.

A mostly negative review of the reader has already shown up in the USA Today.  Besides criticizing the lack of functionality mentioned above, the review goes on to complain about how Interead’s Cooler Books store compares to Amazon‘s.  New releases on Cooler Books have costs comparable to their real-life hardcover counterparts, meaning many titles are $10-12 more than on the Kindle.

But it seems the review somewhat misses the point.  Like the successful iPod Nano it is designed after, the COOL-ER provides one function at a significantly discounted price.  And while Cooler Books has higher prices, it is because the publishers are given more control.  The result is that Interead actually has a much larger selection of eBooks than Amazon, even if grossly overpriced.

Even more importantly, it’s possible to avoid the expensive Cooler Books store altogether.  Unlike the Kindle, the COOL-ER reader is based around the ePub format and not tied to any specific service.  This makes it compatible with Google’s upcoming book store.  If Google’s device-agnostic service proves to be popular, the COOL-ER is exactly the type of reader it’s average customer would own.  It certainly lacks the power of a Kindle, but at over $100 cheaper, many people would gladly give up the Kindle’s extra features.  It’ll be worth seeing how Interead competes in the future.

Feature Comparisons at a glance: