Sources have recently reported that Amazon may be about to open up a whole new direction for their Kindle marketing.  Before the end of this year we can expect to be seeing the first small store or stores arriving in Seattle.  This seems to be intended as a preliminary effort directed at determining the viability of such outlets as a real money maker, but there is some reason to think that this could be a big factor in the future of both the Kindle and Amazon’s new publishing imprints.

With Barnes & Noble’s recent decision to effectively ban all of Amazon’s new efforts in the field of publishing, the company is going to be needing new ways to showcase their products.  These boutique style stores would offer them the chance to make up for the lack, especially as it seems likely that their intention is to increase their involvement in publication rather than let it fall away under external pressures.

While it seems less likely, given that focus will probably be at least somewhat important, there is even the chance that this will be Amazon’s biggest move so far to show off their product lines in various other areas aside from books and eReaders.  Their AmazonBasics consumer electronics line has at least some connection to things like the Kindle Fire, even if their Strathwood furniture wouldn’t fit so well.  Hard to imagine that even a small store could be properly stocked using nothing but three Kindle eReaders, the Kindle Fire, some accessories, and whatever books they are able to get published before the end of the year. Read how to open PKG file.

Interestingly, this is not the first time that Amazon has been rumored to be working on building themselves a physical presence.  Unlike previous instances, though, the details do seem to add up here.  In addition to the fact that the proposed pilot store would be in Seattle, home of Amazon and a state where sales taxes are already being collected by the company, the initial report indicates that they have already contracted store design through a shell company.  It will be small rather than something intended to compete head to head in every area at once with other retail giants like Walmart, which also makes a good deal of sense for a company that derives a great deal of benefit from being highly distinct from such stores while still offering amazing savings.  Most importantly, unlike the 2009 rumors Amazon has not jumped in to quash this one before it takes hold.

While there are downsides to building a Brick & Mortar presence for the Kindle line, especially given the numerous partnerships that Amazon maintains with the likes of Best Buy and Target to keep their hardware available on the local level, being able to highlight something with as much investment behind it as the Kindle Fire and its anticipated successor might well be worth the risks.  Hopefully over the next few months we will learn more about how Amazon intends to show off the Kindle to their advantage.

Amazon’s new @author feature is a new addition to their Kindle-based social media effort.  Currently in a limited beta release, the feature promises to create an even closer author to reader connection by allowing readers to send along questions for their favorite authors right from the Kindle itself.  While it may turn out to be a mixed blessing for authors already being pulled in far more directions than ever before to get maximum exposure, many will undoubtedly welcome the opportunity.

In its ideal use case, the @author feature will be a source for frequent connections with curious readers that allows for one-on-one contact and gives readers a chance to resolve points of confusion by going directly to the source.  At the same time, since questions are visible from the author’s Amazon page and answerable by anybody, this should help to foster a sense of community among readers.  It seems a lot like Kindle authors are getting the best of both worlds.  There are promotional opportunities from the comfort of their own homes when they are building an audience and an open forum for discussion when that audience gets large enough and involved enough that people start answering each other’s questions.

Obviously the advantage for Amazon in all of this is that the Kindle‘s integration into the communication process will give it that much more pull on customers and potential Kindle Direct Publishing authors.  The user experience of the upcoming Kindle Tablet will also involve tighter connections than ever to the Amazon.com storefront, which makes this a further selling point for the new hardware, at least among readers, should they market it properly.

There are potential downsides with this, as with all new services.  Because it is still a limited beta release, we have no real way of knowing what kind of moderation the @author question/answer system will enjoy upon release.  As anybody who frequents the Amazon product forums can attest, open discussion on the site doesn’t always tend toward the most productive side of things.  There is also a new set of authorial duties that will take some getting used to.

Since the ride of eBooks began, many have expressed concern that the increased emphasis on self publishing would result in the best marketers rising to the top rather than the best writers.  In theory, after all, the role of the publishing house was to select the best of the best to bring readers only exactly what they want to read.  In some ways, it’s a very important concern.  Sure, you can now sell your own book without bothering to get an agent, editor, or publisher, but now you also have to complete every stage of development from the start with no large support structure.

Undoubtedly some amazing authors have fallen by the side of the road for exactly that reason.  Overall though, with the sheer number of increasingly successful Kindle authors, we’ve seen an increase in the number of great writers being read.  This will probably bring a little bit more hassle for some people, but it will also facilitate convenient conversation and have a net positive effect for any author smart enough to take advantage of it.

It is not surprising to see me claiming that the Kindle is a great product, nor that the Kindle Tablet line is likely to be impressive.  The former point is by now, I think, borne out as more than simply personal bias.  The latter, while possibly wishful thinking given the lack of official detail so far, is based on a few points that seem to make sense to me.  I’ll admit right at the outset that I’m not a market analyst, product tester, or specialist of any really useful sort when it comes to these things.  I still just think that it makes a lot of sense.

The most important point that I see in favor of Amazon’s potential success is the marketing.  So far, nobody has even come close to marketing a tablet as heavily as the iPad has been by Apple.  On the occasions when you see much at all from the competition, they tend to be focusing on specific points of technical superiority.  As far as I can tell, the average consumer is less concerned with what goes on behind the scenes than anything else about their device.  That’s where Apple has managed to do so well up until now.  They make a point of providing devices that “just work” without any knowledge or skill necessary.  Amazon, along the same lines, has demonstrated well by now that they know how to point out what their potential customers might want to know without getting too technical.

The same basic theory applies to the product itself.  Yes, there are some customers who will undoubtedly want to make use of the configurability that an Android Tablet provides to get the most out of every bit of potential the hardware has to offer.  What will make the Kindle Tablet stand out, however, is a clean, understandable, and heavily supported user experience that any customer can pick up in no time at all.  Whether or not existing tablets offer this, and some do to at least some extent, this is something that Amazon is known to do well based on both the Kindle as we know it today and the Amazon.com site as a whole.

I’m also hoping, of course, that they choose to make a big deal out of screen technology.  Now, I love the iPad.  I find all sorts of uses for it.  The LCD screen is, in my personal opinion, its weakest point.  If Amazon can release a Kindle Tablet with an optionally back-lit screen, not only should battery life make them stand out impressively, but general use will improve to the point where people cannot help but take notice.  Now, we can’t know for sure that this will happen, but after having an entire ad campaign devoted to pointing out the shortcomings of the iPad’s LCD screen, I think it is fairly inevitable.

All of this makes the assumption, of course, that Amazon will be able to undercut Apple on tablet pricing.  At present, Kindle Tablet pricing is estimated to be around $399 at launch.  This would give them a jump on the iPad even with an underpowered device.  Look how well the Nook Color did even before B&N realized that it didn’t work as just a dedicated eReader. 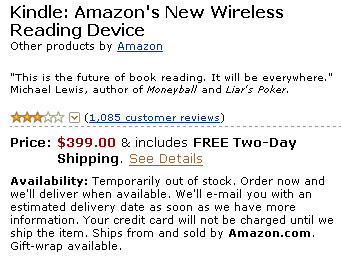 Yeah it’s old news from November, but I still think it needs to be mentioned on this blog. It’s still amazing to me that Kindle sold out in just 5.5 hours.

However this was over a month ago and Amazon.com still says that Kindle is out of stock, and there is still no word on when new units will be available. With Christmas just one week away many people will not be able get one in time, so what do you guys think? is Amazon purposefully holding onto new units in order to build up buzz about the device ?

We will let you know the minute that Kindle is back in stock.