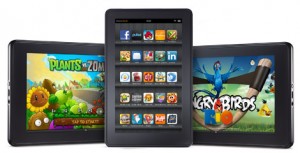 I have watched so many people who otherwise wouldn’t consider a tablet purchase a Kindle Fire this year because of the great price and good company brand.  In addition to the $199 regular price, you can find deals for refurbished Fires for $139.  The Kindle has certainly come a long way in 5 years.

The Kindle Fire took the tablet out of the niche market and into the hands of your average consumers.

The 7″ Kindle Fire is a good compromise for those who want the advantages of a smartphone and tablet in one device.  You don’t have to worry about a data plan, and the app store boasts a robust collection of Android based apps for the tablet.  It is portable and less than half the price of the low end model iPad.

With all of that said, I question the need for a larger Kindle Fire at least for the time being.  I don’t doubt that Amazon has the means to produce a good quality, competitively priced one.  There is a rumor going around that a 10.1 inch Kindle Fire will be released later this year, and plans for a smaller, second generation one will be put on hold.  That is the part I’m skeptical about.  If Amazon wants to reach out to a full audience, it needs to appeal to both markets.

Larger tablets lose portability.  The iPad is not easy to hold for long periods of time.  The computing power would need to be stronger.

So, to sum it up, I think that the first generation Kindle Fire fared quite well with room for improvement.  Those improvements such as a built in camera, faster browsing, screen quality, etc, can all be addressed in the next generation.  Working from that, a larger version is a good goal to work towards.

But, that’s just my opinion on it.  The tablet market as a whole is exploding.  The competition is fierce and we are most likely headed for tablet centered computing.

Rumors will fly and lots of times you can take them with a grain of salt, but it will be interesting to see what really happens in the next few months.