What began as seemingly little more than an experiment to test whether or not there was a market for intermediate length written works, Amazon’s Kindle Singles program, has succeeded beyond all expectations.  To highlight this fact, they have made a rare exception to the usual policy of never releasing sales numbers to reveal that the 2-millionth sale of a Kindle Single had been made.  Estimates put the company’s revenue from the program at over $1,200,000 in the 14 months since the program launched.

Unlike the larger Kindle Direct Publishing program, Kindle Singles are highly selective and can be extremely difficult to create.  If accepted, however, they tend to be almost guaranteed successes.  Those millions of sales were divided up among fewer than 200 short works.  Considering that this is a form that had completely gone out of fashion and that many felt was at best of marginal interest, it is an amazing accomplishment for Amazon to have come so far with them. 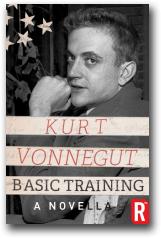 Now things are getting even better, thanks to an exclusive deal with Rosetta Books.  They have arranged for the Kindle Singles program to have exclusive access to a never before published piece by Kurt Vonnegut.  Written in the 1940s, Basic Training is about 20,000 words and was intended to be published under the pseudonym Mark Harvey.  It is a very early work by the author and while likely rejected for a reason at the time it was submitted, hence the never before published status, will be quite interesting for any Vonnegut fan.

In a way this demonstrates how effective it is to have quality control factors involved in determining available selections.  The average title in the Singles program is obviously doing better than the average KDP eBook.  Potential readers know in advance that the whole library of Singles has been screened and approved, which removes some of the uncertainty that has plagued the eBook publishing scene for a while now.  Nobody runs the risk of picking up what looks to be a good book and turns out to be nothing but a five page advertisement for questionable internet pharmaceutical sales sites.

On the other hand, because this is such a narrowly defined category of books, the Kindle Singles do hold a certain special place that might make their example a poor one in terms of wider applicability.  Much of Amazon’s success in the realm of digital publishing is coming as a result of offering any aspiring author to get their work out there in hopes that it can stand on its own merits even without the endorsement of a major publisher.  If they were to seriously undertake gate keeping duties for the Kindle, it would undermine that aspect of the business.

No matter how you personally view the situation, it is safe to say that this is positive information for those who find the quicker, more concise offerings of the Kindle Singles shop enjoyable.  Sometimes it is just nice to be able to read this sort of work without unnecessary cutting or padding to fit more familiar forms.

Check out Basic Training now for $1.99, only at Amazon