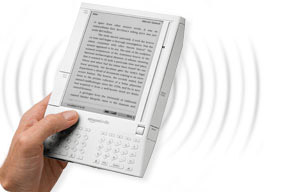 There has been an interesting development for UK Kindle fans, user TadW on MobileRead forums stumbled upon an article in the London Evening Standard which reviewed the Kindle, whilst the review offers nothing new in terms of information, there was a glimmer of hope for a UK autumn release date.

For now, in any case, at the moment, the Kindle is only available in America. There have been reports that Amazon. co.uk plans to launch a version of it here in the autumn (perhaps using wi-fi, rather than a phone system?) but when I asked a spokesman for the company about this, he refused to comment, monotonously repeating we dont talk about future plans.

But it seems the Kindle has now begun to acquire some of the momentum that iPods picked up over other MP3 players; just as iPods changed the way we listen, so the Kindle may, by next summer, say, be impacting on the way many of us read.

I say glimmer because that’s all it was, a tiny glimmer. A UK release would present some challenges for Amazon, the dominant standard for cellular communication in the UK is Global System for Mobile (GSM) whereas in the US it is Evolution Data Optimized (EVDO), Amazon would also have to negotiate a contract with a UK carrier. Amazon recently revealed that it had optimised its supply chain which was one of the reasons for the $40 price drop, with the supply problems behind them Amazon could now concentrate on developing the Kindle for new markets, and the UK & Europe would be a huge market for Amazon.

Amazon will most likely offer different versions of the Kindle in different countries, but for now I think Amazon will see how the Kindle performs in the US before they think about releasing it in the UK or anywhere else, which makes the autumn release seem a bit premature.