As many people expected, the Google Nexus 7 tablet is a product developed specifically to knock Amazon off of the top of the Android charts.  Hardware-wise, it is certainly more powerful.  Whether this is enough to actually sway users is still in question, however, since the popularity of the Kindle Fire has never been based on its performance alone.  The software is another story.

By releasing the Nexus 7 with the newest version of Android (4.1 Jelly Bean) Google packed in some major advantages that Amazon never even had the option of putting in the Kindle Fire in the first place.  It was a smart decision, given reviews, and things are looking up for Google at the moment.  Kindle Fire owners might still feel a bit left out, however.

That is where XDA comes in.  It is the good people over on the XDA Developers forums who we have to thank for any number of Android hacks, including the ability to gain root access on the Kindle Fire.  Their most recent Kindle-related development is a custom ROM for installing Jelly Bean on the Kindle Fire. 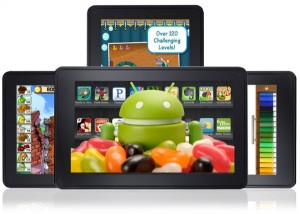 Now, Amazon has not exactly set any records for taking security on their device seriously.  The last time an update went so far as to disable the security hole by which people were rooting their tablets, another option was available immediately.  If I recall correctly, the new rooting method might have been released before the update was ever rolled out thanks to somebody getting their hands on it a couple days early.  As such, it seems unlikely that Amazon will be terribly worried about the impact of customer device customizations on their bottom line.

The existing Android 4.1 ROM for the Kindle Fire is still being worked on.  It is fairly simple to install using the instructions provided over at XDA, but not everything is enabled just yet.  There is a bit of a problem with the wifi connectivity, though that is more an inconvenience than anything and fixes can be found scattered around, and various minor complaints have come up with certain apps in cases where this ROM is installed on top of an existing custom ROM.

Should you decide that you want to try all the newest features from Google, look this option up.  Keep in mind, however, that doing so will void your warranty.  It is also possible that you can render your device unusable if you botch the installation.  These are standard cautions that anybody attempting this process should be aware of.

Amazon has done a great job with developing a fork of Android 2.3 specifically for the Kindle Fire.  Users seem to really like it and the integration with Amazon services is impressively smooth.  Chances are good that the new Kindle Fire 2 will ship with an even more advanced build that offers far more features.  None of that means that the desire to try the unlocked, open version of Android is unusual or problematic.  If you do it right, follow all the instructions, and exercise caution then a completely different experience is available to try.