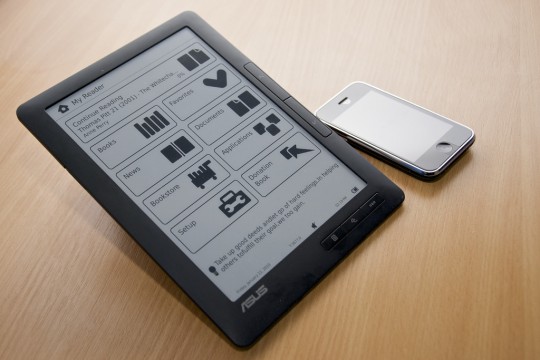 Asus has this strategy of throwing everything against the wall and seeing what sticks. So earlier this month Asus officially acknowledged that they have an e-Book reader in the pipeline. There were rumors about an Asus e-reader that has a 5inch OLED screen that carries the model number DR-570. But this is called the DR-950 and it has a 9inch e-Ink display. The same kind of display that is used on the Kindle.

It has a resolution of 1024×768 and has support for ePub, PDF and HTML. There’s also text-to-speech and RSS reader, which are good features to have. Onboard storage is 2-4GB and it is expandable via an SD card slot. There’s a 3.5mm headphone out and a USB port too. The 0.35inch thinness is pretty impressive and Asus is even considering  putting in WiMax into that frame. There’s already WiFi and HSDPA built in. The eInk screen has a touch-sensitive layer on top of  it, so there are concerns about the display losing some clarity and readability.

The rumors about the DR-570 refuse to die down however and Digitimes insists that Asus will ship two readers and not one. The current time frame is Q2 2010, so we will know soon. The OLED screen will definitely be no match for the eInk screen in terms of battery life and readability but it will be able to display color and video. So it will likely be a color eBook reader. It must be kept in mind that Asus also has a tablet device planned. So if they release a touchscreen OLED e-reader, it will definitely cannibalize any market that the Eee Pad has.

As for the e-reader competing with the Kindle, it can be safely assumed that there is no way Asus can catch the Kindle bookstore and the International Kindle’s free wireless anywhere in the world. So Asus has to be satisfied with only a niche market.