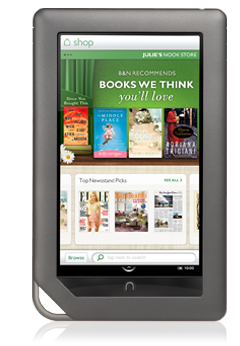 Beginning just days before the press conference that revealed the Kindle Fire to the world, rumors started popping up that Barnes & Noble was nervously prepping their next tablet for a hurried launch to avoid getting shut out of the market.  Naturally they haven’t confirmed these rumors to any degree so far, but the latest reports indicate the potential for both a cheaper Nook Color hardware update and a larger, more powerful incarnation of the same at around $350.

For the past couple months, it’s been pretty great to be Barnes & Noble.  They’ve been selling one of the most functional affordable tablets on the market, almost by accident.  They’ve had what was honestly the best eReader in the US market in terms of performance and readability.  On top of this, Amazon spent months seeming to ignore the world of eReading hardware aside from vague hints.  It couldn’t last forever, but they got to make a big splash with no significant recently released competition.

At first glance Amazon has now got a huge advantage again, especially in terms of the Kindle Fire.  While the Nook Color brought a lot of function for comparatively little money, its main value has generally been in how easily rooted it is.  Barnes & Noble has added an internal app store that has gotten quite a bit better over time, but they have nothing quite as robust as the Amazon Android App Store nor do they have the ability to offer the same kind of end to end experience that the Kindle Fire is anticipated to provide.  Simply put, the emphasis on the Nook Color as specifically a color eReader might have backfired.

Since B&N is experiencing a great deal of its current success (what there is of it) from the Nook line, they cannot afford to not respond.  Fortunately, from the sound of things, there were plans in place.  The Nook Simple Touch eReader shouldn’t have any real problems just now.  It might be slightly more expensive than the cheapest of the Kindle Touch models coming up, but the technology is comparable and for now we have to assume that the experience will be generally similar.  What they’re worried about is the Tablet competition.

A new, larger, more powerful Nook Color, assuming rumors hold some basis in reality, will be either announced or released before the end of October at around $350. This, along with a hardware update to the existing Nook Color, would theoretically have a chance of bringing them back to the front of consumer perception again in time for the 2011 holiday season.

Admittedly we’re talking about theoretical hardware at the moment, so as with most of the Kindle Tablet speculation it has to be taken with a grain of salt.  Still, if they can bring hardware and content availability anywhere near to in line with what Amazon is offering with the Kindle Fire it would be great.  Just the announcement of a $200 tablet from Amazon has already changed hardware prices in the market significantly.  Real, effective competition among budget tablet providers can only be a good thing.