Obviously the Nook Tablet hasn’t done quite as well as Barnes & Noble hoped it would.  While the hardware was a definite step up from the Kindle Fire from the start, their inability to bundle the same quantity and quality of non-eBook content had an effect on adoption rates.  Now, with the Kindle Fire HD poised to bring Amazon back into the front of the Android tablet market for the first time since Google announced the Nexus 7, Barnes & Noble has come up with some much stronger competition. 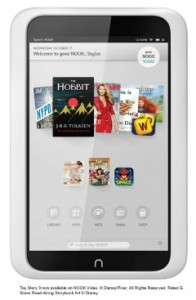 The Nook HD is priced at $199, just like the Kindle Fire HD.  It has a higher resolution (1440 x 900) and a smaller hard drive (though a 16GB model can bring that spec even with the Kindle Fire’s basic model for only $30 more).  The processor on the new Nook is 1.3GHz, which gives it a slight edge in power as well.  It even has a microSD slot, which is one of the features Amazon seems to be making a conscious effort to avoid.  Overall we’re looking at a nearly identical device with small points of superiority here and there.

There are a few points where the Kindle Fire HD still stands alone, however, and they may be particularly important.  Since the major purpose of this variety of tablet is media consumption, we have to assume that there is some video viewing planned for the average user.

The Kindle Fire HD’s Dolby sound system and stereo speakers are widely considered to be the best tablet sound system on the market today regardless of the device size or price.  That’s a big step away from the old Kindle Fire’s lackluster audio performance and will be attractive.

The Kindle’s superior wireless capabilities and larger hard drive only serve to push it further ahead.  If the goal is to enjoy the best possible viewing experience, the ability to stay connected, download quickly, and store more will obviously come in handy. 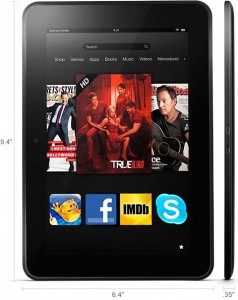 The deciding factor as far as overall success, however, is going to still be the content ecosystem.  A media tablet that has nothing in the way of media to serve up is clearly unappealing.  Amazon has the lead on this, having both a head start and a huge presence in practically every aspect of digital media distribution.  Barnes & Noble is stepping up to at least stay competitive until they can develop a more robust selection, though.  Nook Cloud and Nook Video are good examples, even if they are still a bit unfinished-feeling.

While I don’t think that the Nook HD can necessarily compete on even terms with the Kindle Fire HD for the price, the Nook HD+ might be able to pull it off.  The 9” Nook HD+ offers comparable hardware to the Kindle Fire HD 8.9” for $30 less than Amazon’s $299 asking price.  It’s easier to overlook a couple shortcomings for a discount.

Whether or not they can pull ahead with an offering like this remains to be seem.  Nothing about the new Nook tablets stands out as a major downside except perhaps the limited Barnes & Noble ecosystem.  This launch demonstrates a commitment to stay in the market for a while, so maybe even that will see rapid improvements as time goes on.  It’s good to see a situation like this where nobody can pull ahead as the clearly superior option.