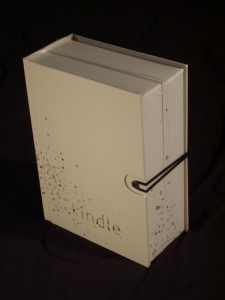 One of the biggest impediments to eBook Reader distribution has always seemed to be exposure. Those of us who enjoy such things were forced, with each product that arrived on the market, to weigh the pros and cons of each device based on rumors, specs, and buyer feedback without, in most cases, ever having the chance to see a device in person. New reports indicate that this is going to be a phenomenon of the past, however!

Now, I’m not saying that this was a problem for everybody. Originally those who were close enough to a Sony run store had this luxury, of course, and in fact still do. Hell, the Sony Readers have long since come to Target stores around the country as well. Today, however, the eBook market is heating up based on distribution models and 3g devices like the nook and Kindle have center stage as they make the move to the big name storefronts.

Later this month, the 25th if reports can be believed, we should be seeing the Amazon Kindle popping up at Target stores all over the place. In what may be a coincidence, but is probably a reaction, Best Buys will in turn be picking up sales of Barnes & Noble’s nook. This should be a fun time.