Kurt Vonnegut is one of the greats, and today’s Kindle Daily Deal features 14 of his books for just $1.99 each (75% off). From Vonnegut’s short-story collection “Welcome to the Monkey House” to his satirical novel “God Bless You Mr. Rosewater,” today’s deal is perfect for Vonnegut fans and those just discovering his work. Here is the list of the set:

Kurt Vonnegut (1922-2007) is one of the most beloved American writers of the twentieth century. Vonnegut’s audience increased steadily since his first five pieces in the 1950s and grew from there. His 1968 novel Slaughterhouse-Five has become a canonic war novel with Joseph Heller’s Catch-22 to form the truest and darkest of what came from World War II.

Vonnegut began his career as a science fiction writer, and his early novels–Player Piano and The Sirens of Titan–were categorized as such even as they appealed to an audience far beyond the reach of the category. In the 1960s, Vonnegut became closely associated with the Baby Boomer generation, a writer on that side, so to speak. Learn how to open ODS file.

Now that Vonnegut’s work has been studied as a large body of work, it has been more deeply understood and unified. There is a consistency to his satirical insight, humor and anger which makes his work so synergistic. It seems clear that the more of Vonnegut’s work you read, the more it resonates and the more you wish to read. Scholars believe that Vonnegut’s reputation (like Mark Twain’s) will grow steadily through the decades as his work continues to increase in relevance and new connections are formed, new insights made.

Stolen is a book for young readers. It was written by Vivian Vande Velde and cost only $1.99.

The same day that the villagers of Thornstowe finally hunt down a witch with a reputation for stealing children, a 12-year-old appears in the woods with no memory of her past. Is there a connection between Isabelle, the girl who doesn’t know who she is, and the girl the witch stole six years earlier? One of the few things Isabelle remembers is a chant that keeps running through her head:

Old as dirt,
dirty as dirt.
Ugly as sin,
mean as sin.

Could Isabelle have been stolen by the old witch of the woods, or has she lost her memory as the result of an accident? And what about the baby the witch stole right before the villagers attacked? Did either the witch or the baby survive the fire the villagers set?

“Isabelle heard no sound beyond the faintest shivering of leaves in a gentle breeze. No sound of pursuit. But surely something was wrong, or she would know who and where she was. So she resumed running. But it wasn’t as effortless as before. Her worry weighed her down as she tried to list the things she knew—and found the list of things she didn’t know longer by far.”

Vivian Vande Velde’s books have won many awards, including the Edgar Allan Poe Award for Never Trust a Dead Man. She is also the author of Ghost of a Hanged Man. She lives in Rochester, New York. 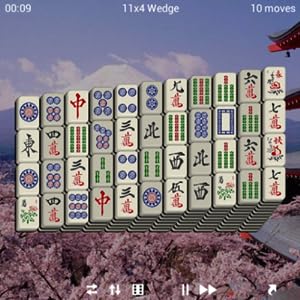 Also Amazon offers ShisenSho. It is a game and you can get it for free today only.

ShisenSho, sometimes known as “Four Rivers”, is a single-player, tile based board game, where the objective is to remove all tiles from the board.

ShisenSho has 45+ challenging and varied layouts and has been designed to provide an appealing but challenging experience for the user. The user interface is clean and easy to use and, with a choice of tile-sets and the inclusion of high resolution backgrounds, the game is visually stunning.

Standard – normal game, high scores are maintained by board layout;
Race – race against time to get on the high score board;
Chase – tiles reappear on the board as the game progresses;
Memory – match hidden tiles, seriously difficult..!

It is an excellent game for all age groups, providing stimulation and a mental challenge.