Abby Sinclair deals in risk assessment—but it’s lives, not fortunes, that are at stake. The Los Angeles investigator goes undercover to figure out whether a client’s stalker is simply an overzealous fan or a dangerous psychopath. She’s learned the hard way that the difference isn’t always apparent until it’s too late. In Raymond Hickle’s case, however, Abby has no doubts.

The awkward loner’s fixation with gorgeous news anchor Kris Barwood has progressed from creepy to murderous. So Abby befriends Hickle, trying to gauge when and how he’ll strike. Yet her target is as wily as he is unhinged, and Abby has unwittingly made herself a madman’s latest obsession. With her reputation and life on the line, Abby races to save Kris before Hickle eliminates them both.

Michael Prescott was born and raised in New Jersey and attended Wesleyan University, majoring in film studies. After college, he moved to Los Angeles to pursue a career as a screenwriter. In 1986 he sold his first novel, and has gone on to pen six thrillers under the name Brian Harper and ten books as Michael Prescott. He has sold more than one million print copies and is finding a large new audience through e-books. Fan-favorite character Abby Sinclair, the “stalker’s stalker” first introduced in The Shadow Hunter, has since appeared in three more books.

For those who loves to read Romance Amazon offers Grand Sophy by Georgette Heyer for $1.99.

Sophy sets everything right for her desperate family in one of Georgette Heyer’s most popular Regency romances.

When Lady Ombersley agrees to take in her young niece, no one expects Sophy, who sweeps in and immediately takes the ton by storm. Sophy discovers that her aunt’s family is in desperate need of her talent for setting everything right: Ceclia is in love with a poet, Charles has tyrannical tendencies that are being aggravated by his grim fiancee, her uncle is of no use at all, and the younger children are in desperate need of some fun and freedom. By the time she’s done, Sophy has commandeered Charles’s horses, his household, and finally, his heart.

Georgette Heyer, who wrote over fifty novels died in 1974.

In the section of Sci-Fi / Fantasy Amazon offers Genesis by Bernard Beckett just for $1.99.

Anax thinks she knows history. Her grueling all-day Examination has just begun, and if she passes, she’ll be admitted into the Academy—the elite governing institution of her utopian society. But Anax is about to discover that for all her learning, the history she’s been taught isn’t the whole story. And the Academy isn’t what she believes it to be. In this brilliant novel of dazzling ingenuity, Anax’s examination leads us into a future where we are confronted with unresolved questions raised by science and philosophy. Centuries old, these questions have gained new urgency in the face of rapidly developing technology. What is consciousness? What makes us human? If artificial intelligence were developed to a high enough capability, what special status could humanity still claim? Outstanding and original, Beckett’s dramatic narrative comes to a shocking conclusion.

Bernard Beckett, born in 1967, is a high school teacher based in Wellington, New Zealand, where he teaches drama, mathematics, and English. Genesis was written while he was on a Royal Society genetics research fellowship investigating DNA mutations. The book has already received international acclaim, including two literary prizes in Beckett’s native New Zealand. Rights to Genesis have been sold in twenty-one countries.

A Dress for Me! by Sue Fliess, Mike Laughead is a book from kids section just for $1.99 for today only.

Should we shop now? I say, Yes! Mom says I can choose a dress! Hippo is looking for a new dress There are so many choices! Dresses with beads and fringe, dresses with shiny sequins, dresses with stripes and checkers, and more! Watch me as I try them all! Will Hippo find the perfect dress? Sue Fliess’s rhyming text and Mike Laughead’s adorable digital illustrations bring to life Hippo’s exciting day at the mall.

Sue Fliess is the author of Tons of Trucks illustrated by Betsy Snyder, as well as a number of upcoming picture books. She lives in Mountain View, California, with her husband, two sons, and their guinea pig.

Mike Laughead is the illustrator of a number of children’s books, including a series of easy readers written by Anastasia Suen. He lives in Kalamazoo, Michigan, with his wife and two daughters. 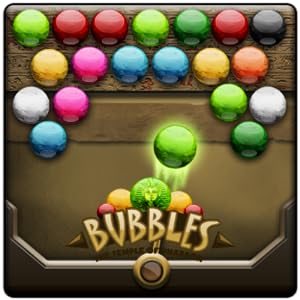 Bubbles Touch is a free game for today only.

The idea is to create a group of at least three bubbles to explode them. Bubbles that are not attached to anything get dropped. Each dropped bubble gives you an extra bubble to shoot! Drop special balls to get extra features like the chainsaw ball!