Freeman, the new novel by Leonard Pitts, Jr., takes place in the first few months following the Confederate surrender and the assassination of Abraham Lincoln. Upon learning of Lee’s surrender, Sam–a runaway slave who once worked for the Union Army–decides to leave his safe haven in Philadelphia and set out on foot to return to the war-torn South. What compels him on this almost-suicidal course is the desire to find his wife, the mother of his only child, whom he and their son left behind 15 years earlier on the Mississippi farm to which they all “belonged.”

At the same time, Sam’s wife, Tilda, is being forced to walk at gunpoint with her owner and two of his other slaves from the charred remains of his Mississippi farm into Arkansas, in search of an undefined place that would still respect his entitlements as slaveowner and Confederate officer.

The book’s third main character, Prudence, is a fearless, headstrong white woman of means who leaves her Boston home for Buford, Mississippi, to start a school for the former bondsmen, and thus honor her father’s dying wish.

At bottom, Freeman is a love story–sweeping, generous, brutal, compassionate, patient–about the feelings people were determined to honor, despite the enormous constraints of the times. It is this aspect of the book that should ensure it a strong, vocal, core audience of African-American women, who will help propel its likely critical acclaim to a wider audience. At the same time, this book addresses several themes that are still hotly debated today, some 145 years after the official end of the Civil War. Like Cold Mountain, Freeman illuminates the times and places it describes from a fresh perspective, with stunning results. It has the potential to become a classic addition to the literature dealing with this period. Few other novels so powerfully capture the pathos and possibility of the era particularly as it reflects the ordeal of the black slaves grappling with the promise–and the terror–of their new status as free men and women.

Leonard Pitts, Jr., is a columnist for the Miami Herald and the recipient of the 2004 Pulitzer Prize for commentary, in addition to many other awards. He is also the author of the novel Before I Forget; the collection Forward From this Moment: Selected Columns, 1994–2009, and Becoming Dad: Black Men and the Journey to Fatherhood. Leonard lives in suburban Washington, D.C., with his wife and children. Sean Crisden is a multitalented actor who has narrated audiobooks in almost every genre, from science fiction to romance. He has also voiced characters in numerous video games, such as the award-winning ShadowGun, and appeared in many commercials and films, including The Last Airbender. A native of Philadelphia, Pennsylvania, Sean now resides in Phoenix, Arizona.

Promises to the Dead by Mary Downing Hahn is a book for kids and costs only $1.99

When Jesse went down to the marsh on that fateful day, he expected to find a turtle for terrapin soup. Instead, he comes across a dying slave woman who makes Jesse promise he’ll take her young son, Perry, to a relative in Baltimore. Aiding and abetting a slave is against the law, and it also goes against everything Jesse has been taught to believe. But he can’t break a promise to the dead, and, more important, he has to follow what he knows in his heart to be right.

The journey is more treacherous than Jesse ever imagined. At the crossroads of a country about to plunge into civil war, danger lurks around every corner. Will these boys on the run ever find a safe haven?

Some words about the Auhtor

Mary Downing Hahn, a former children’s librarian, is the award-winning author of many popular ghost stories, including Deep and Dark and Dangerous and The Old Willis Place. An avid reader, traveler, and all-around arts lover, Ms. Hahn lives in Columbia, Maryland, with her two cats, Oscar and Rufus. 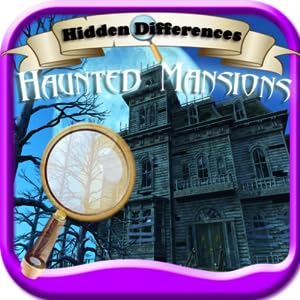 Hidden Differences: Haunted Mansions is a free game today only.

Hidden Differences: Haunted Mansions is a fun, traditional game of Spot the Difference or Photo Hunting where your object is to find all the differences in the various haunted, creepy, and scary mansions!

Explore various venues from around the world, with creepy houses, haunted stairwells, and mysterious clocktowers!

Play 2 different modes of play, either Free Play, or Timed Mode depending on your skill level! Timed Mode lets you rack up the highest score, whereas free play allows infinite time to find all the hidden differences in each photo!

Some differences are easy to find, whereas others may be more difficult – very well balanced play for players of all ages!

Detailed and gorgeous photos along with addictive gameplay make this a must have game for kids and adults!

Curl up on the couch and play solo, or grab a friend and see if you can find all the differences!