Today Amazon offers Into the Darkest Corner by Elizabeth Haynes just for $1.99.

Catherine Bailey has been enjoying the single life long enough to know a catch when she sees one. Gorgeous, charismatic and spontaneous, Lee seems almost too perfect to be true. And her friends clearly agree, as each in turn falls under his spell.

But what begins as flattering attentiveness and passionate sex turns into raging jealousy, and Catherine soon learns there is a darker side to Lee. His increasingly erratic, controlling behaviour becomes frightening, but no one believes her when she shares her fears. Increasingly isolated and driven into the darkest corner of her world, a desperate Catherine plans a meticulous escape.

Four years later, Lee is behind bars and Catherine—now Cathy—compulsively checks the locks and doors in her apartment, trusting no one. But when an attractive upstairs neighbour, Stuart, comes into her life, Cathy dares to hope that happiness and love may still be possible . . . until she receives a phone call informing her of Lee’s impending release. Soon after, Cathy thinks she catches a glimpse of the former best friend who testified against her in the trial; she begins to return home to find objects subtly rearranged in her apartment, one of Lee’s old tricks. Convinced she is back in her former lover’s sights, Cathy prepares to wrestle with the demons of her past for the last time.

Utterly convincing in its portrayal of obsession, Into the Darkest corner is an ingeniously structured and plotted tour de force of suspense that marks the arrival of a major new talent.

Elizabeth Haynes is a police intelligence analyst. She started writing fiction in 2006 with the annual challenge of National Novel Writing Month (NaNoWriMo) and the encouragement of the creative writing courses at West Dean College. She lives in a village near Maidstone, Kent, with her husband and son.

Yellow Star by Jennifer Roy is only $1.99 today only.

“In 1945 the war ended. The Germans surrendered, and the ghetto was liberated. Out of over a quarter of a million people, about 800 walked out of the ghetto. Of those who survived, only twelve were children. I was one of the twelve.” For more than fifty years after the war, Syvia, like many Holocaust survivors, did not talk about her experiences in the Lodz ghetto in Poland. She buried her past in order to move forward. But finally she decided it was time to share her story, and so she told it to her niece, who has re-told it here using free verse inspired by her aunt.This is the true story of Syvia Perlmutter — a story of courage, heartbreak, and finally survival despite the terrible circumstances in which she grew up. A timeline, historical notes, and an author’s note are included. 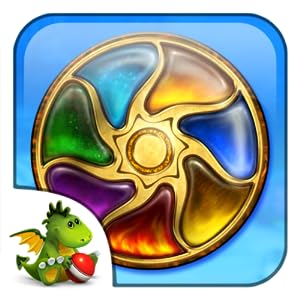 Call of Atlantis (Premium) is a game for your Kindle Fire. Download it for free today only.

Atlantis is calling out to a true hero to save it from deadly peril! Set out on an exciting new quest in this spectacular mix of Match-3 and Adventure. Embark on a fascinating tile-swapping journey around the ancient lands of Rome, Greece, Troy, Phoenicia, Babylon, Egypt and Carthage to acquire seven mysterious crystals of power. Once collected and put together, they are able to restore the Altar of Poseidon and save the fabled sunken continent. Fully optimized for the touch screen, the game sets new quality standards for Android puzzle games with fantastic graphics and superb sound effects.