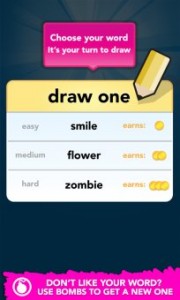 Have you been wanting to engage in a social experience with friends using your Kindle Fire despite its lack of camera or microphone?  If so, it’s a good time to head to the App Store and check out the new releases.  OMGPOP’s hit game “Draw Something” is now in stock.  With both Free and Ad-Free flavors ready for your download, everybody has a way to play.

Much like the ever-popular Words With Friends, a game which came packaged with the Kindle Fire, users are matched up with friends in a turn-based back and forth game.  There are no time limits, and you can have a number of simultaneous games going if that suits your mood.  Don’t have friends who play?  No problem.  Draw Something will match you up with complete strangers at random just so you have something to do with your time.

The core game mechanic in Draw Something is…ok, you can probably figure that one out on your own.  Anyway, each player takes turns either drawing one of three word options presented at random or trying to guess what word the other player was trying to represent with their drawing.  It’s a pretty straightforward kind of game.  Scoring is done using in-game currency, which can then be used to purchase things like extra colors for your use when doing more drawing.  Naturally there is also a micro-transaction option, but it is unobtrusive and easily ignored.

This new release still has a couple problems with it compared to more established incarnations.  There have been issues reported when logging into your account from multiple devices.  There have been similar, yet seemingly unrelated problems for people who own multiple Kindle Fire devices on the same account.  Perhaps the biggest problem that people are running into is the lack of an option to take a screenshot.  Since achieving popularity, Draw Something screenshots have been shared all over the internet and the inability to save a particularly good one due to limitations in the Kindle Fire’s software may be frustrating. Learn how to open CDR file.

As with many other popular social games, Draw Something is a cross-platform program.  Players can connect with their friends over Facebook or via usernames chosen within the app itself.  If you want to do without a Facebook account then you will need an email address, but there have been no reports of these addresses being abused or spammed in any way.

What it all comes down to is that Kindle Fire users have access to perhaps the most popular time-waster type of game on the market for the moment, which by extension more than doubles the potential Android Tablet user pool.  Better late than never, of course, and there will most likely be months yet before something else comes along to capture popular attention.  Have fun with it and exercise your creative side.

1 thought on “Draw Something for the Kindle Fire Now Available”