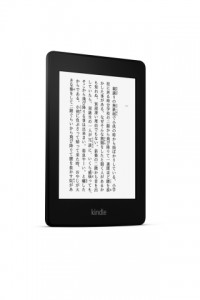 The move away from physical keyboards gave Amazon an easy route into any number of non-Anglophone markets for the first time.  They’ve made good use of that since the Kindle Touch was first released.  In addition to being able to find a Kindle practically anywhere in the world, localized versions of the popular eReader can now be found for a number of language options.  Now, for the first time, Amazon is pushing their efforts into Asia with the first ever Japanese Kindle.

Amazon.co.jp will now have its own Kindle Store and will be offering the Kindle Paperwhite for sale.  Preordering is now open for both the WiFi and 3G versions of the device.  The prices are currently ￥8,480 and ￥12,980 respectively.  They will begin shipping on November 19th.

Japan has proven a hard market for Amazon to move the Kindle into so far.  Their site has been operating successfully there for twelve years now, but it has been reported that they had trouble getting Japanese publishers interested in doing business with them after all of the conflict between Amazon and the Big 6 publishing houses in US markets.  It seems that terms have now been reached that are considered satisfactory.  The press release for this announcement indicates that over 50,000 Japanese-language titles will be available at launch and that these will include the largest selection of Oricon best sellers anywhere.

Naturally all of these titles will be accessible through Amazon’s various distribution channels.  Kindle Paperwhite owners will be able to make use of the new store, but so will Kindle Fire owners, Kindle app users, and anybody with a web browser.

Introducing the Kindle line to Japan is a particularly important move for Amazon if they want to keep expanding the customer base.  While geographically small, Japan is home to one of the most literate cultures in the world.  It also enjoys the widest newspaper circulation anywhere and may prove a useful place to renew interest in digitally distributed newspapers and magazines.

There is also a large market for graphic literature to be exploited.  This launch will include over 15,000 manga selections.  Kindle Format 8’s Panel View will come in handy for this and the high contrast Kindle Paperwhite display could prove an ideal medium for these books. Learn how to open JSON file.

The Kindle Fire and Kindle Fire HD are also now available in Japan and should be shipping on December 19th, one month after the Paperwhite goes out.  While this caters to a different market, having options is never a bad idea.  The Kindle Fire HD might not be quite as good for reading as its single-purpose eReader counterpart, but it does provide a greater versatility and convenience for the money.