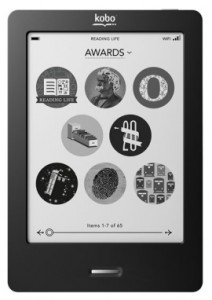 Earlier this year, in April, Amazon launched a localized German Kindle Store with over 650,000 titles and around 25,000 German language offerings.  Overall, at least for the time, a strong offering.  In addition to this, Amazon opened up Kindle Direct Publishing for the Amazon.de site, and made sure that Direct Publishing submissions to the original Kindle Store would already be in the German store, assuming rights were available to make this possible.  Now, three months later, competition is becoming a bit more heated and this might not be enough to stay appealing to the broader audience on its own.

The Canada based Kobo eBook store will now be available to the German audience.  At launch, they have managed a reported 2.4 million eBooks and over 80,000 German language titles.  That’s a lot of books.  Along with the store launch, there are also German language Kobo eReader apps for the iPhone, iPad, basically anything with an ‘i’ in front of it, and Android.  A Playbook app is on the way.  There will even be a German version of the Kobo eReader itself released in August.  Now, the Kobo business model has always been aimed at a broad international presence.  They emphasize open systems, EPUB distribution, and the primacy of the reading experience.  Even the Kobo eReader seemed tacked on as almost an afterthought.  So far, however, they haven’t really hit the big time.

The main problem that they are running into, I think, is their lack of hardware emphasis.  Not as a means of profit, of course, but as a way to provide a physical presence to their customers.  We know that Amazon isn’t exactly making loads off of individual Kindle sales, but by providing something better than a PC or cell phone for their customers to read on, they gain customer loyalty.  If you’re stuck using a phone for your eBooks anyway, it doesn’t matter in practice who you buy from since the apps are all free anyway.

The new Kobo eReader suffered something of a setback when its otherwise impressive upgrades from the original Kobo were completely overshadowed by the superior experience and competitive pricing of the new Nook Simple Touch eReader.  By comparison, it’s just a better product.  So Kobo is given that much more incentive to push their international pursuits since the Kindle presence is limited and the Nook is non-existent.  In untouched or underrepresented eBook markets, the Kobo store can stand on its own merits and try to build up a hardware independent following, at least in theory.

The one obstacle I see, at least right this minute, is the lack of eReader offering at store launch.  If you’re going to have a localized device, great!  It sets you that much further apart from the Kindle.  Don’t expect to launch the store now and have people stay excited about it for a month while they wait for the gadget. If they can keep the buzz going, great, but it’s going to be a difficult task.

As for the future of the Kobo?  They are currently planning similar store launches in Spain, France, Italy, and Holland, to name a few.  While I might personally prefer other offerings available in America, possibly because I speak English primarily and don’t have to pay fees to import things that don’t always even work in my country, there is little wrong with the Kobo and anything that builds up the worldwide eBook marketplace will just help things along for everybody.