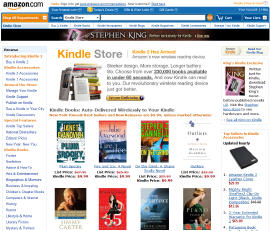 As the Kindle Store is bombarded with countless titles of little or no value to potential purchasers, Amazon has to be wondering what can be done to keep this situation from casting a bad light on the whole Kindle brand.  It’s still a great device with an impressive attached store, but who wants to have to look out for scams and malware links when they’re just trying to grab a book?  The problem is that there’s a fairly subtle difference between honestly bad books and the pretty much useless content that users of systems like Autopilot Kindle Cash that attempt to exploit the system.  How do you tell when an author is putting out something they genuinely expect people to want to have paid money for?  I have a couple ideas.

First, I think that it is not unreasonable to restrict the number of book postings that an individual author can make in a day, except by special request.  Currently, as far as I can tell, there is little regulation on the process unless you are trying to fit into the Kindle Singles category.  Do we really believe that many authors have a genuine need to even consider publishing 10 books in a day, or 100 books in a week?  I understand that throwing up the back catalog of an author can involve a lengthy list sometimes and I think that should be possible if they clear it with Amazon Customer Service first, but as a general situation there’s no real need.  Why not say that you can only post one book per day, or three per week, and take the easiest means of profiting from these exploitative tactics away?

Perhaps a better way would be to have a way for verified purchasers of Kindle books be able to flag a purchase as spam.  Make it work off of a percentage system, wherein any Kindle Edition eBook that is flagged by 30% or more of purchasers (with a minimum of five or so to prevent the most blatant forms of abuse) is either taken down for review or publicly labeled as potentially harmful until it can be reviewed.  This would allow Amazon to get away with letting their customers police the system in a manner similar to the existing ratings system and point the finger at bad uploads for removal at the company’s convenience.

I realize that both systems come with their own problems, of course, but something needs to be done.  Millions of Kindle owners and readers simply deserve better than what’s being thrown at them.  Maybe adopt something like these fairly simple ideas, but have a method whereby authors can apply for exemption as needed?  It is a complex issue.  There are enough obstacles to deal with in the transition away from paper books that we don’t need this to be an ongoing problem, though.  It is time for Amazon to make use of the control inherent in having their own platform to change things for the better.

2 thoughts on “How Amazon Can Handle Their Kindle Spam Problem”