The Kindle Fire is a powerful device for the price and as a result many people are eager to get the greatest possible return on their investment.  It can definitely do more than what the default UI brings to the user’s attention, given the de-emphasis on apps in favor of media consumption.  This has led to an ongoing complaint that the Kindle Fire’s custom launcher is a bar to purchasing because of its break from the general Android experience.

People generally understand, from a financial perspective at least, why Amazon felt the need to cut their tablet off from the Google Marketplace (now Google Play) in favor of the Amazon Appstore for Android.  The building a visually distinct user experience tends to be more troubling.

Having had more experience with Android smartphones than tablets, I have generally been inclined to favor the Kindle Fire UI on a personal level.  It handles everything I feel the tablet is good for and doesn’t bother me with anything else unless I put it on the Favorites bar.  When I got an email from a reader here recently about an app called Go Launcher EX that would change everything around to a more general Android tablet experience without all the trouble of rooting, though, I felt I had to give it a try.

The program is available in the Amazon Appstore 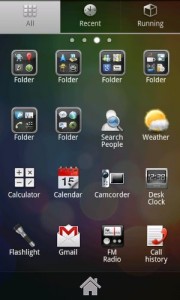 , but it is listed as incompatible with the Kindle Fire.  This is not entirely the case.  If you download the .apk from the developer’s website (making sure to enable side-loading in your Kindle’s settings), it will install with no trouble.  The app is freely available.

What you get for the effort is a great deal of customization.  Multiple pages of customizable screen space are opened up by default.  Widgets are included that will keep you up to date on everything from the weather to your device’s battery life and more are available with little trouble through a built-in store.  Technically the backgrounds for the desktop screens are configurable, though that isn’t entirely functional alongside the Kindle Fire’s password screen for some reason.  In general, while far more complicated than the default launcher, Go Launcher EX did bring a great deal of the tablet versatility that might be what people want.

Unfortunately, while using the new launcher I found the Kindle to be noticeably slower to react.  Even when making use of the included utilities to completely free up active memory in every safe way possible, the experience included stuttering from time to time that reminded me of the Kindle Fire’s state before the first major firmware patch.

On top of this, the shift in emphasis to favor apps over Amazon’s integrated services seems to open up new possibilities at the expense of clarity and intuitive design.  For a good half hour I was near to believing it might be impossible to gain access to cloud-stored apps and documents, for example.  Overall I can’t really recommend for or against changing your launcher.  I think the Kindle Fire shipped with a UI that is fast, intuitive, and plays to the hardware’s strengths.  That doesn’t mean it is perfect or that you won’t find things you wish it would do better.

I will probably want to try something like Go Launcher again on a larger tablet, but for now I’m still finding the best uses of such a small device are exactly where they have always been.  Apps can help with the consumption focus, but I’ll never need to have half a dozen screens full of them on the Kindle Fire like I do on my phone.