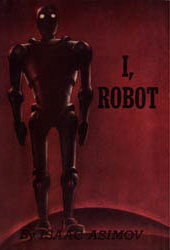 In this collection, one of the great classics of science fiction, Isaac Asimov set out the principles of robot behaviour that we know as the Three Laws of Robotics. Here are stories of robots gone mad, mind-reading robots, robots with a sense of humour, robot politicians, and robots who secretly run the world, all told with Asimov’s trademark dramatic blend of science fact and science fiction.

The three laws of Robotics:

With these three, simple directives, Isaac Asimov changed our perception of robots forever when he formulated the laws governing their behavior. In I, Robot, Asimov chronicles the development of the robot through a series of interlinked stories: from its primitive origins in the present to its ultimate perfection in the not-so-distant future—a future in which humanity itself may be rendered obsolete.

Here are stories of robots gone mad, of mind-read robots, and robots with a sense of humor. Of robot politicians, and robots who secretly run the world—all told with the dramatic blend of science fact and science fiction that has become Asmiov’s trademark.

“Ninety-eight — ninety-nine — one hundred.” Gloria withdrew her chubby little forearm from before her eyes and stood for a moment, wrinkling her nose and blinking in the sunlight. Then, trying to watch in all directions at once, she withdrew a few cautious steps from the tree against which she had been leaning.

She craned her neck to investigate the possibilities of a clump of bushes to the right and then withdrew farther to obtain a better angle for viewing its dark recesses. The quiet was profound except for the incessant buzzing of insects and the occasional chirrup of some hardy bird, braving the midday sun.

Gloria pouted, “I bet he went inside the house, and I’ve told him a million times that that’s not fair.”

With tiny lips pressed together tightly and a severe frown crinkling her forehead, she moved determinedly toward the two-story building up past the driveway.

Too late she heard the rustling sound behind her, followed by the distinctive and rhythmic clump-clump of Robbie’s metal feet. She whirled about to see her triumphing companion emerge from hiding and make for the home-tree at full speed.

Gloria shrieked in dismay. “Wait, Robbie! That wasn’t fair, Robbie! You promised you wouldn’t run until I found you.” Her little feet could make no headway at all against Robbie’s giant strides. Then, within ten feet of the goal, Robbie’s pace slowed suddenly to the merest of crawls, and Gloria, with one final burst of wild speed, dashed pantingly past him to touch the welcome bark of home-tree first.

Gleefully, she turned on the faithful Robbie, and with the basest of ingratitude, rewarded him for his sacrifice by taunting him cruelly for a lack of running ability.

Robbie didn’t answer, of course — not in words. He pantomimed running instead, inching away until Gloria found herself running after him as he dodged her narrowly, forcing her to veer in helpless circles, little arms outstretched and fanning at the air.

“Robbie,” she squealed, “stand still!” — And the laughter was forced out of her in breathless jerks.

–Until he turned suddenly and caught her up, whirling her round, so that for her the world fell away for a moment with a blue emptiness beneath, and green trees stretching hungrily downward toward the void. Then she was down in the grass again, leaning against Robbie’s leg and still holding a hard, metal finger.

After a while, her breath returned. She pushed uselessly at her disheveled hair in vague imitation of one of her mother’s gestures and twisted to see if her dress were torn.

She slapped her hand against Robbie’s torso, “Bad boy! I’ll spank you!”

And Robbie cowered, holding his hands over his face so that she had to add, “No, I won’t, Robbie. I won’t spank you. But anyway, it’s my turn to hide now because you’ve got longer legs and you promised not to run till I found you.”

Robbie nodded his head — a small parallelepiped with rounded edges and corners attached to a similar but much larger parallelepiped that served as torso by means of a short, flexible stalk — and obediently faced the tree. A thin, metal film descended over his glowing eyes and from within his body came a steady, resonant ticking.