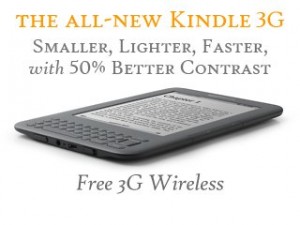 Looks like the Kindle 3G has just become that much more affordable. Apparently, thanks to an agreement with AT&T involving Kindle advertisements, Amazon has been able to drop the price of their 3G model noticeably. Now, for $139, just $25 more than the Kindle WiFi w/ Special Offers, you can’t really argue with the cost of convenience.

The move is well timed, given the current level of competition in the eReader world.  While the Kindle is still pretty much on top, especially internationally, the new Nook Simple Touch and Kobo eReaders are heating things up.  Since there are a few months to wait before the next iteration of the Kindle hits shelves, so to speak, it is important to emphasize the things that they have and nobody else does.  Things like the only really useful 3G connection on an eReader.  There isn’t one at all on the new Nook or Kobo releases, and the Nook 1st Edition is very limited in many ways including the 3G, by comparison.

This also does a lot to demonstrate the potential in the Kindle’s advertising support system.  A surprising number of people got upset at the Kindle w/ Special Offers being discounted rather than entirely free on release.  While I believe that to have been a bit optimistic for something being subsidized by an untried source of revenue, as advertisers catch on the prices will continue to drop.  In addition to the new deal with AT&T, the details of which have not been publicly released to the best of my knowledge, the Kindle is currently being sponsored by such companies as General Motors, Proctor & Gamble, and Chase.  If they were not seeing positive results, it would seem unlikely that even another big advertising partner would be enough to bring a price drop along with it.

For those who are in the market for a new eReader, the Kindle 3G w/ Special Offers retains all of its original functionality.  The screen, battery life, interface, and general readability are all as great as ever.  Even the ads, as much as they are conceptual abhorent to many when talking about their inclusion in a reading experience, are unobtrusive and never even hinted at while you are looking at a book.  The only major differences over the Kindle 3G are that this one is $50 cheaper and gives you something besides the slideshow of author portraits to see as screensavers.

For now this discount only applies to the 3G option, leaving the Kindle WiFi w/ Special Offers witting at $114.  Still a great price, but I would not be at all surprised to see a major sale in the near future.  While it is conceivable that the extra discount has at its core a service agreement that makes the 3G coverage on new Kindles cheaper for Amazon to maintain, which would in turn not apply to the WiFi models, a $25 difference doesn’t exactly set the two Kindles apart much and a $99 Kindle would make for some truly excellent sales numbers if analysts are to be believed.  Something to keep an eye on in weeks to come.