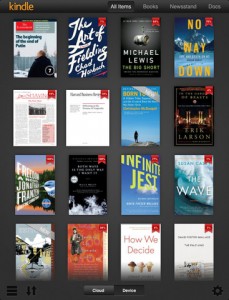 The most recent round of updates to the Kindle platform has begun to expand beyond the realm of Amazon-designed hardware.  Users of the Kindle for iOS and Kindle for Android are now enjoying updates to their software.  This comes as part of Amazon’s transition to the new Kindle Format 8 system which, while still an ongoing process, will eventually offer superior formatting control to publishers on every supported device.

The Kindle for iOS update makes this version 3.1 of the app.  The most notable changes are specifically meant for users of the iPad.  On the tablet, this app now supports KF8 formatting already in use in many children’s books and comics.  These include Kindle Text Pop Up and Kindle Panel View.  iPad users will also get to have a bit more control over their general reading experience.  You get smaller margins and an overall cleaner look to the page, which should help in any book.

The update wasn’t just for iPad users though.  Everybody running Kindle for iOS will now once again be able to look up words via Google and Wikipedia again.  The loss of that ability was a matter of some annoyance for many a while back.  Navigation should also be somewhat improved for all thanks to a search function allowing users to access specific titles and authors.

Kindle for Android didn’t get quite so extensive a treatment this time around, but what was changed will be important for some.  Assuming you are running Android on a tablet, version 3.6.0 will allow for more extensive formatting controls.  These include similar improvements in margin control as on the iPad, but also line spacing and landscape optimization controls.  If you choose to, you can now view two pages side by side in Kindle for Android to better simulate the experience of reading a paper book.  From experience, including but not limited to the Kindle Fire, I can say that this has a hugely positive effect on landscape formatted tablet reading.

No word has been given just yet about whether or not the KF8 features that have now made their way to the iOS app, along with the Kindle eReader and more, will be coming to Android in the near future.  I would say to expect them around the same time as the new Kindle is released at the latest, but we don’t know when that will be beyond that it is most likely before the end of July.

While I am a huge fan of the dedicated eReader for any sort of extended reading experience, the Kindle apps add a level of convenience that you really have to appreciate.  Not every occasion for reading requires pulling out the Kindle and sitting for hours poring over your favorite book.  These improvements are a good sign that Amazon is paying attention to the way their apps present themselves on various platforms and device types, as well as signaling that they have every intention of optimizing things for as many users as possible.