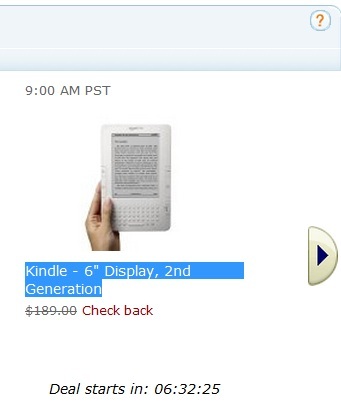 While this is the previous generation, that isn’t saying much against it.  The Kindle 2 is a great, very reliable piece of hardware that would still stand up as competition against pretty much anything on the market.  It uses the same screen as the Nook eReader that was its ongoing competition, is nearly as compact as the current generation, and has access to all of the books, games, and applications(i.e. Facebook integration, web browsing, etc) that you would expect.  When it comes right down to it, you really can’t beat $89 for a Kindle of any sort given that the equivalent competition is going for $149.

And of course, should you be out of luck on Kindle 2, you can always get the latest generation Kindle 3 with WiFi for $139.